The United States has made some encouraging progress since I debated the question “Should Abortion be Legal?” Last year in October, I debated with staunch abortion opponent Carol Everett. 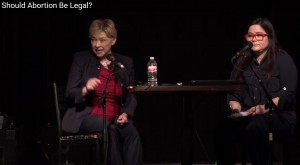 Everett makes the rounds on conservative programs such as the 700 Club and Focus on the Family and also Fox News. Her group, the Heidi Group, networks and trains Crisis Pregnancy Centers that are most often run by Christians to dissuade people with crisis pregnancies from having an abortion. In fact, many of these centers, that accept government funding, also have a Christian-only hiring policy.

Since the debate held here in Texas, the Supreme Court has struck down Texas’s Targeted Regulations against Abortion Providers law –HB2. The debate was arranged by the Bible and Beer Consortium, who kindly made the video available to me last week. I promised to fact check some of Carol Everett’s claims more than a few of which were outrageous such as about 90 percent of women suffering from PTSD post-abortion because of their decision to abort.  This is a common anti-abortion claim and it has been debunked according to an American Psychological Association report:

The best scientific evidence published indicates that among adult women who have an unplanned pregnancy the relative risk of mental health problems is no greater if they have a single elective first-trimester abortion than if they deliver that pregnancy.

Made up and misleading statistics are a common anti-abortion tactic. However, reproductive health public policy decisions should be informed by medical studies from scientists with relevant expertise that can be relied on. There were other egregious claims during the debate that should be exposed to the light of reason. Aron and I posted the entire debate in context to his channel before the claims are deconstructed. The comments on the BBC channel are disabled for whatever reason, so I am hoping that valuable insights will be gathered in comments elsewhere. [youtube]https://www.youtube.com/watch?v=q4hGyyJYtMc[/youtube]

Unfortunately, I also anticipate some of the trolling that is par for the course on issues that affect women’s rights. It is also not easy for me to wade through such an aggravating and emotionally challenging debate to fact check it. I do appreciate the BBC for having women debate this topic, although that set me up to get bashed a bit by a questioner. There is also some generalizing about the Chinese that I endured question after question about from the same person that I will set straight. The truth is most important to me and my hope in debating abortion was that more people would see the evidence that supports safe and legal abortions.