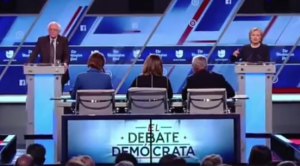 Call me what you will, but this is my position. I have given this a helluva lotta thought over the last several months, and I’m completely sincere in what I say. Every single person I personally know is a Bernie supporter -including people who normally vote Republican. How could any sane or rational person vote Republican in THIS election? I have only ever met only one person in person who said they would vote for Hillary, but that was back when Bernie first announced his candidacy. So that person likely didn’t even know about Bernie yet.

Likewise absolutely every single person I’ve been able to sit and talk with throughout my tour of India, the UAE, or any country in Europe have ALL said they’re hoping that we elect Bernie. Again, that’s every single person without exception, and they say it before they hear my opinion. I have never looked into anyone’s face who has ever supported Hillary on anything. They all know better, absolutely every one of them. They all cite solid reasons for this, and they’re the very same long list of reasons I cite myself. Because this is all public knowledge, and we’re alert: we pay attention.

Yet every time I hear from a Hillary supporter, which so far have only a few random posters online, I get a confirmation that they haven’t been following anything: They can’t even give one good reason to vote for her over Bernie. The best I’ve ever heard yet is that they think Hillary would be a better president, but they can’t say why, and that illusion is demonstrably false anyway.

This last election cycle, I was stunned with my jaw hanging open. How could Hillary win anything? Who the fuck is voting for her? And better yet, why? She has a “no we can’t” attitude. How does that convince anybody? Even if you think Bernie couldn’t do all that he wants to, you should still support his attempt. Because it needs to be done!

The biggest issue for me is our slide into oligarchy, where corporations decide who will lead and what will pass. Bernie is the only candidate on either side who is even aware of this, just like he is the only one advocating for environmental issues. Hillary has NEVER started out on the right side of history. We don’t have time to wait for her to ‘evolve’ on these issues, and she should have corrected herself long before now anyway. But there are other reasons that we know she isn’t going to, no matter what the data is.

She didn’t support gay marriage until she saw it was popular, and would never have supported it otherwise. She STILL doesn’t support the decriminalization of marijuana. This isn’t just bad judgement on her part. It’s not that she somehow doesn’t know about any of the data from every direction that should have made this clear to her by now. But the reason she hasn’t is apparently because she receives money from commercial prisons who invest millions to perpetuate the drug war -in order to keep enough prisoners coming in for business purposes. She won’t fix the problem because she IS the problem! Cowering to business interests over moral issues is exactly why she would NOT be a better candidate than Bernie. How is this not obvious to everyone else?

Bernie may be the single most virtuous candidate we’ve ever had in my lifetime. That’s no exaggeration. He’s not just better than Hillary; he’s better than everybody, the only candidate in either party with a net positive approval rating, and he’s rated to beat everyone in the GOP by a high margin. And he came into the race at a pivotal moment, when we have only one last chance to get money out of politics and reverse Citizens United, so that we won’t die in a corporatacracy. We’ll have other opportunities to elect the first woman president, like when Elizabeth Warren runs after Bernie’s term. (Warren has recently endorsed Bernie’s policies while questioning the Clinton campaign, by the way) But we won’t get another chance to keep this corporate corruption from setting in stone, and Hillary is obviously determined to see that it does, because that’s what she’s being paid to do.

I’ve been to Bernie’s rallies that dwarf those of every other candidate combined. So I can’t tell you how surprised and disappointed I was in my fellow Americans when Hillary took every state this week. How can that be? What the fuck is wrong with these people? I’ve tried querying Hillary supporters and I’ve tried teaching them. They give no reason, and there is just no reasoning with them. Instead they allege all sorts of accusations against Bernie supporters, none of which apply to me, or anyone else I know of for that matter. There simply is no defense.

There is a reason why this is being called a revolution, and there is a reason that the Media has been dismissing Bernie from the start. CNN is owned by Time Warner, and Time Warner is one of the biggest contributor’s to Hillary’s campaign. So of course they’re going to support her, certainly when any fix must be seen as a threat to them. She is the marionette of establishment politics. So if you want our country to be run by corporate interests, vote for the puppet who will only insure that. But if you want to at least try to fix things, then stop voting for puppets when there is a vastly more electable and far better candidate with much more experience and infinitely more credibility and accountability with a better record of decisions and policies than her. Don’t make me vote for the lesser evil again. Let the better man win.

You better believe it …or else