Of course many white feminists get that advocating for gender equality is valueless if you don’t include equality for people of color too. Supporting women of color is a no brainer. Then there are a few with blind spots, who ostensibly get this idea, but then in practice fail to question their own internalized racist ideas.

This is Ani DiFranco, singer, poet, equal rights activist, and to some feminist icon in words on economic and gender equality…

If you’re not angry

or you don’t care

how else can you react

the men of the hour

can kill half the world in war

make them slaves to a super power

and let them die poor

Here she is using slavery as a metaphor for fascist, capitalist, patriarchal oppression by imperialists. Yet here she is in deed...

Why doesn’t she get that the Nottoway Plantation is the largest former plantation in the South?

Mark Faulk points on his blog what the problem is..

Here’s the problem: Nottoway Plantation is the largest plantation mansion in the South, literally built by slaves who had to carry the huge logs over (as Nottoway’s own website puts it) “miles of plantation ground to the construction site”. The owner, John Hampden Randolph, built his fortune on the backs of slaves. He even signed over 46 slaves as collateral to build his 53,000 square foot dream house.

To date there has been no official response by DiFranco to answer the criticism about the appropriateness of the venue or to cancel this event. People make mistakes, and sure this one is a huge oversight in the most charitable light. But when people call it to your attention that you’re holding your folk songwriting event in a symbol of oppressive capitalism such that 46 human beings were used as capital to build it -just maybe you should reconsider. And too, going with what should be becoming more painstakingly obvious upon further reflection -the place is also an oppressive patriarchal monument.

More importantly, DiFranco and other non-black feminists can’t feel the injustice done here as keenly as black feminists do, but they can do the work required to empathize. I am not black and I haven’t really experienced the racism directed at black people in America. Even though my son is black, I can only listen and empathize. If you inadvertently step on someone’s toes; apologize and listen so you can make things right. Admittedly the price tag of this event is prohibitive to most people of any color, but who wouldn’t want to be welcoming to all women?

Although there are people calling DiFranco out as racist for this event, what it looks more like to me is a disconnect between words and deeds in regards to racial equality. Where the absurdity of this venue would have been immediately obvious to a black feminist; these things can be overlooked by some white feminists because institutionalized racism doesn’t target them. Indeed popular fiction like Gone with the Wind  glamorizes the Old South for young girls. The appeal of this plantation is that of a whitewashed bygone era of Southern gentility.

In absence of DiFranco’s answer to criticism there is a comment war going on between DiFranco’s defenders of her choice of venue and rational people on her facebook, who don’t get why people don’t get this.  The defenses range from minimization and telling black women what they should feel about this to outright absurd, racist gate-keeping as documented by For Harriet  . Get your oven mitts ready to facepalm… 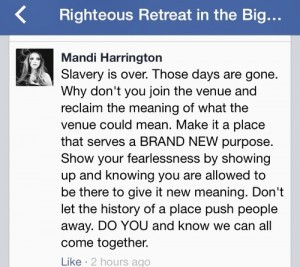 The post as is, is patronizing and has a badly, misunderstood idea of what it means to “reclaim” something. What if a man told her to attend an event at a “historic” and “captivating” remodeled Magdalene laundry owned by Hobby Lobby because the baby stealing era is over and “reclaim” it and give a symbol of brutal, dehumanizing oppression a “new meaning ? She could rightly tell them where they could go!

The post was bad enough, but in an absurd effort that would be funny if she wasn’t serious she posted this… 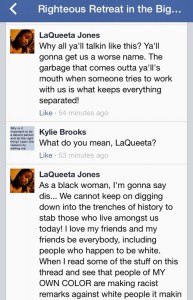 This post doesn’t resemble the speech pattern of any black feminist that anyone knows. The name LaQueeta Jones on top of this may be a clue that she doesn’t know any real, black people apart from hackneyed stereotypes. She goes on embarrassing herself, and illustrating the need for some whites to get out more especially if they are toting equality until someone busts her. 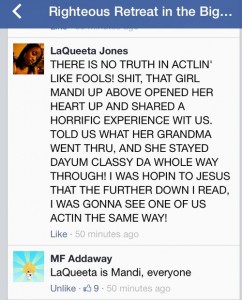 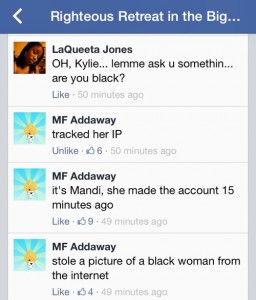 Who are these people? Seriously. Who gets this personally invested in defending reprehensible, regressive ideologies? It would be funny if these types of ideas don’t pop up in every earnest discussion about racial injustice. When you find yourself telling people that they should just adopt the right attitude about the racist things that happen to them -just stop.  Even less obvious racist crap like this, like Di Franco’s decision of an exclusionary venue for songwriting about gender and economic equality have the net effect of marginalizing people of color’s voices.  Equal means everyone should ideally have an equal place at the table. Do the work and put more thought into it DiFranco.

However, as frustrating as the whole thing is, you can take heart in the fact that most of the posts are calling for Di Franco to do something about this on the event page. They are posting this same statement to her facebook.

“I stand in solidarity with the Black women calling Ani Difranco out for this decision to hold the Righteous Retreat at the site of a former plantation.”

[notice]About 15 min ago, DiFranco replied to the criticism on her facebook. You can view it in its entirety here. I’m still weighing her words, before I decide. I am glad though that she canceled the event and gave it more thought. [/notice]

24 thoughts on “Ani DiFranco and white feminist gate-keeping to the point of absurdity.”

Secular Community Fundraiser for Orphans of the Smith Tragedy

Is Texas doomed to another theocratic governor?