Normally whoever wins the debate is whoever you already agreed with before it began, but it seems that Twitter has an objective way of determining the winner of last night’s Democratic debate. See the link here. 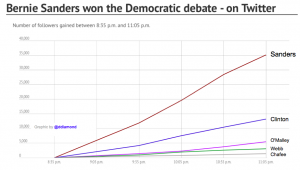 It was an amusing thing to see. The funniest summary I saw on Twitter was “a corporate sell-out, an idealist, and three cardboard cut-outs walk into a bar…”  It did seem like Hillary vs Bernie in the midst of three stuffed suits. I understand those other three didn’t get equal time, but look what they said when they did speak.

Lincoln Chafee said we shouldn’t judge him for not knowing what he voted for because he just got there.

Sen Jim Webb must have been the one Republican who couldn’t fit into the same clown car as the rest of them. So he came to the Democratic debate instead. He told us to vote for him because he didn’t have any enemies after killing that guy in ‘Nam.

Martin O’Malley said Las Vegas was one of the world’s most sustainable cities, but that’s obviously not true to anyone who lives there. Quite the opposite. That’s why I asked him on Twitter whether he had been to Hoover Dam lately. Because the water level is 150 feet lower than it should be -and it is irreversibly dropping. That reservoir [Lake Mead] not only feeds the drinking water for that already overgrown and still rapidly growing desert community; it also generates the electricity for the world’s most electrified city -and also for cities in other states. Las Vegas is not sustainable in any sense, and is facing an imminent disaster.

Hillary performed surprisingly well, but not enough to convince me. I don’t understand why she takes so long to take a position on anything. For example, I don’t smoke marijuana myself, but I can’t understand why it shouldn’t be legal. Tobacco is worse isn’t it? Otherwise I think the results are in from Alaska, Colorado, and Oregon -to say nothing of the Netherlands. American states can make substantial revenue on a product they also regulate. What is the problem here? But Hillary seems to adopt policies only after she has determined whether they’re popular with other people. That’s why she recently adopted Bernie Sanders’ policies, once she saw how popular he is.

I also think Hillary performed better than Bernie did last night, in the way she presented herself, probably her best performance to date. But I realize it is a performance. Bernie has been consistently progressive forever, and that’s the sort of influence over government that I most want to see.

In my opinion, if you want to make the US great again, go back to what made it great when it was. Once upon a time, we were the most secular nation. Then we became the most educated country, a nation of producers, innovators, and inventors. We had strong unions, federal regulations, paid less taxes and got more for it, and we had a booming middle class with the world’s highest standard of living.  Then somehow we lost all that, got ridiculously religious again, and became incurious myopic consumers -rejecting science and rewriting history, and plunging back into poverty and ignorance. That’s how it seems to me anyway.

If you needed another reason to go to Reason Rally…