Of course Texas Governor and Christian Culture Warrior, Greg Abbott, has pledged his full support for the Childress Police Department’s commandeering of state owned police vehicles for the motto “In God we Trust”.

Our state has displayed blatant disregard for nonbelievers, polytheists, and pantheists, who also pay their property and sales taxes to maintain the police and the legislature. Heck they even defaced the Senate chamber with this exclusionary motto. 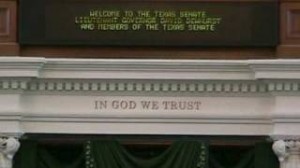 Abbott also labelled the Freedom From Religion Foundation as “misguided and malicious” for standing up for non-believing Texans.

“Misguided and malicious threats have become routine for groups like the FFRF. In December 2011, the FFRF sent a letter threatening to sue Henderson County, Texas, if the county refused to take down a nativity display on the courthouse grounds,” he wrote. “In December 2014, the American Humanist Association sent a similar letter to the county judge in Cherokee County, Texas, demanding the removal of a courthouse nativity display. As attorney general, I offered my support to both counties in the event that the organizations followed through with the lawsuits. Neither organization followed through with the threat.”

Which goes to show you how smug the government is here about favoring the Christian majority. Abbott knows we have to keep spending our private org’s like the FFRF and the AHA’s limited resources. Meanwhile he can open the state’s coffers and spend money that should be spent on Texas infrastructure like better flood plains in Houston for example. He’s the state’s former Attorney General. He has sued the Obama Administration over 2 dozen times and the Environmental  Protection Agency over 17 times. Remember that the next time a fertilizer plant blows up here next to a school. Content Note: Explosion at the end of the video. [youtube]https://www.youtube.com/watch?v=ROrpKx3aIjA[/youtube] He’s looking out for polluters, and the Christian Right’s need to put decals all over public property. And right now, he’s got the right to do that, because although 70 percent of Texas didn’t vote for him; enough Texans will fall for this political theater to vote for him. The rest watch from the sidelines. Before non-Texans blow off this as Texas tomfoolery, this is happening all over the country.

House Democrats in Seventh Hour of Sit In over Gun Legislation

Texas tackles Moses and the Bible in History Standards Again