The idea behind the ‘Sexy Secular Conference’ at the University of Akron was apparently to present progressive concepts on non-traditional courtships, romantic expression, bending gender roles, and so on. This was not my usual choice of topics, and it’s not going to become one either.  But I took that opportunity to express an opinion, and to share a few concerns I had and still have about myself.  I have never ‘grown’ more as a person than when I realized that I had prejudices, and that they needed to be corrected.  That’s really what this is about. 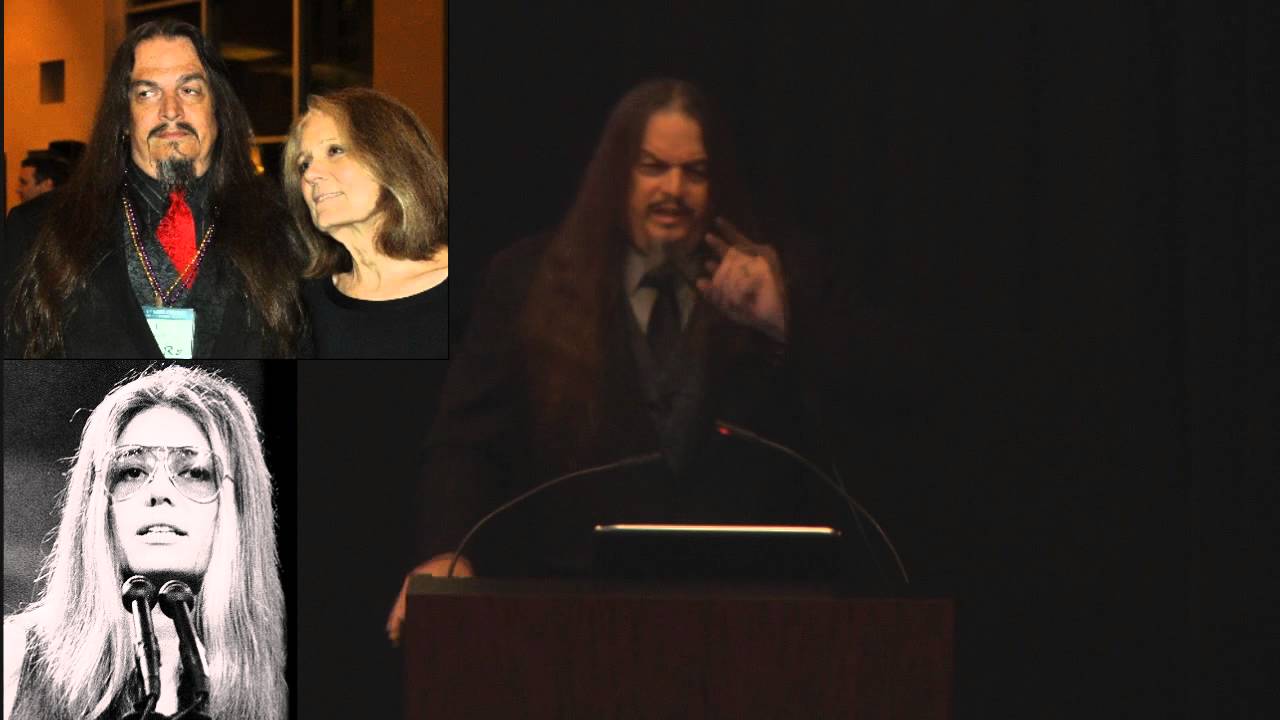 Now that the video is posted, I’d like to respond to a number of criticisms I’ve seen in the comments; not the replies, just the comments.  Most of them merely repeated fallacies I had already addressed in the video. For example, the idea of women having equal rights with men somehow means something different than gender equality, as if men wouldn’t have equal rights with women at the same time, a logical fallacy.

Otherwise, critics did as I predicted, twisting my words into things I never said. For example, I never said women deserved special treatments. In fact, I said that even according to the leader of the feminist movement, they did NOT deserve special treatments -despite my critics’ many allegations to the contrary.

Someone accused me of accusing Thunderf00t of something, and this person said that I am wrong about Thunder in that he doesn’t hold the position [they say] that [I think] that he does.  They didn’t tell me how I got it wrong, and I can’t guess, because they didn’t tell me what I was accusing him of either.  The only information they did give was their assumption that I was talking about Thunder’s video. I wasn’t.  Although I was at one point thinking about a conversation we’d had.

The things I addressed in my video are things that I have personally experienced, or that both sides of the aisle have confirmed, and they didn’t necessarily rely on patriarchy theory.  I know that goes on, but it doesn’t have to be the sole force behind the oppression of women as I see it.  Western religion is unarguably patriarchal, and religion is now and always has been the dominant oppressor of women.  But that obviously doesn’t explain misogyny in the atheist community.

One very weird comment was the charge that I was reciting the mantra of the religion of feminism, and that feminists over-emphasize women, neglecting the rights of men.  This is an important point.  I did mention the inequity of judicial bias toward ‘the mother’ in family court cases.  When I split from my daughter’s mother, several lawyers refused to take my case because [they said] “the mother always wins“. Looking into that at the time, I read and heard from female feminists who said that the bias toward the mother was sexist -in more than one aspect -even though it favored the woman!  That is why that bias has since been corrected!

Can anyone cite for me any instance wherein women are granted superior status?  Or when men are deprived of rights in order to benefit women?  Because I have even heard female feminists arguing that it is sexist to save the women and children first.

Someone said that the standards for women in the military were lower than for men.  My daughter says that is not the case.  She says women can be Marines now, but they still can’t be SEALs because the Navy tested promising female recruits and none of them could meet that standard.  So I don’t think that criticism is true either.

My critics accused me of a false dichotomy when I said that if one is not feminist, then one is sexist. First of all, I said made very clear that it was not a dichotomy at all, that we are all likely to be both to some degree.  But if it was a dichotomy, then it wouldn’t be a false one -according to the very definition of the word.

A lot of people criticized me for using the wrong definition, saying that the dictionary is wrong.  OK, I can point to a few other instances I know of where I can show that practically every dictionary is wrong.  Look up ‘animal’ or ‘abiogenesis’ for example.  However in both of those instances -as in all others- I can show what the real definition is, where to find it, and how to confirm whether it’s accurate.  None of my critics did any of the above. They wouldn’t provide any citation to any other definition, and gave no way to see whether their contention is valid. They said “go watch this”, or “go read that”, but they couldn’t relate or explain -or even show- any arguments supporting their position.

Now someone did produce a quote from Valerie Solanas, an attempted murderer who appears to be THE man-hating lesbian who served as the template ‘radical feminazi’ for all the Wimmin’s Libber–haters I knew growing up.

I’ve also been accused of ignoring the extremists, which I never do. If we argue that Valerie Solanas represents feminism, then we should say that the Westborough Baptist Church represents Christianity.  However even though the Ku Klux Klan say they are exclusively creationist Christians, they also say that Fred Phelps’ Kansas clan is too extreme to represent their views.

It should also be said that if we compare the “God is love” Christians to the “God hates fags” Christians, we can confirm which is closer by comparing each of their philosophies to the doctrine they’re both supposedly based on.  Doing that, we will see that Phelps actually does represent the Christian religion pretty closely, but that Solanas doesn’t match the feminism movement at all.

Solanas’ position clearly neither fits the definition of ‘feminist’ in any dictionary nor any description given of the 5 feminist movements that I have yet seen either.  It is opposed in the sentiments of Gloria Steinem, and all of the other leaders of those movements, as well as their platform itself.  Look them all up in Wikipedia. All the sources I have yet found give the same definition I do.  Where is there a different one?

Someone drew a pretty fair analogy between the definitions of feminism and the meaning of PETA, implying that both should be treated as a movement, rather than sticking to the described meaning of their names.  OK, if we do that, then when and where does the leadership and platform of that movement show this deviation?  Can anyone name the current leaders of whatever phase of the feminist movement we’re currently in? And show me where the platform indicates how I am wrong?

The best criticism I have so far received is that I may be using an out-dated term which might not be the most appropriate, considering that words change meaning over time.  I can understand that.  I mean, I used to identify as agnostic when I was really atheist.  I called myself all kinds of things before BionicDance invented the word, ‘apistevist’.  It was only relatively recently that I started calling myself ‘feminist’.  I used to identify as ‘egalitarian’, and I liked that word much better.  However, that was until someone explained to me the full definition of egalitarian. It refers not only to gender and race, both at the same time, without specification; it also implies that everyone should have the same social and economic status.  Not ‘rights’; ‘status’, as in ‘class’.  The word was being used to promote Communism, in that an egalitarian society meant one in which all the wealth and power was redistributed equally.

Now if that is no longer the sense in which that word is applied, (and that now may be the case) then anyone who prefers to label themselves that way is of course welcome to do so securely.  Although I would still like to differentiate exactly which context of equality I’m talking about in a given instance.

One final note on the topic of feminism/sexism/humanism and so on is this:  Some people say they would rather identify as humanist than feminist.  Greta Christina identifies as a feminist, and just a few months ago, I saw her receive a Humanist-of-the-year award by the American Humanist Association.  Greta is also posts at Freethought Blogs as a proponent of “Atheist +”, a branch of infidel activists primarily concerned with issues of social justice.  There was a lot of animosity against A+ when they formed.  Because of one or two poorly-worded comments, they were seen as divisive and exclusionary.  However, when I told Greta that I choose not to use her label, and that I would refer to myself as a progressive atheist instead, she responded quite clearly, -on camera, and in front of live audience at a major conference:

“I don’t give a damn what people call themselves.

If they’re atheists, and they’re on-board with social justice,

then they’re a friend of mine.”

So in their own words, the leaders of mainstream feminism are not man-haters. They’re not exclusionary or divisive, and they’re not trying to gain superiority over men either.

I should also say this to Greta: In the Q&A, I should have answered that this dialogue still needs to happen. I’m not telling anyone to be quiet about anything they feel is important.  But when we disagree -as we frequently will- I hope we can do it productively.

On the matter of the chromosomal difference between men and women, and the criticism against anyone who says that men are genetically half-female, I know the biology too well to say otherwise; it’s true.  Not all facts are comfortable ones.  Take for example what I said about sexually ambiguous characters like Michael Jackson or ‘Ms Hathaway’ from the Beverly Hillbillies.  I realize my comments will seem insensitive to trans-gendered people.  That is not my intent.  I am not comfortable with the fact that I felt a sort of revulsion against androgynous people when I was a child.  But it is a fact that I did, and I think it would be disingenuous to conceal it.  It might even have clinical value in that (I think) it was a biological rather than cultural response.

Finally I can’t believe that I said Rob Halford was in Iron Maiden.  There was a guy in the audience wearing an Iron Maiden tee-shirt; that might be why.  I am probably more embarrassed about that than anything else.  I’m not even a Maiden fan.  I mean, I’ve seen them live, and it was a great show!  But I love Priest!  Screaming for Vengeance and [ironically] Defenders of the Faith are two of my favorite albums!  So yeah, I’m feelin’ pretty stupid about that.  But I appear to be spot-on about the definition -and application- of feminism.

149 thoughts on “To the critics of my comments on feminism…”

Oh THAT guy?! Nevermind, not in our town.

Satanic Panic and Exorcism in Schools?