People have been able to get safe, legal abortions in the U.S. for over 40 years now. Ever since, Roe Vs. Wade in 1973, abortion rights have been a political football, where our politicians play a game with the health and welfare of millions to score political points. This political season has been the worst in  memory with all of our Republican candidates bragging about how they have defunded or will defund Planned Parenthood if they are president.

Many activists remember fighting this battle long ago, and are chagrined to find the legality of abortion is still at stake. At least that is what I found when I volunteered at a call center to petition the Texas state government to have hearings on HB2, which was passed over staunch opposition in 2 special legislative sessions. This bill placed an undue burden on people with crisis pregnancies to obtain a safe, legal abortion by passing draconian regulations on abortion providers that only left less than 10 clinics in a state the size of Western Europe open.  The bill couldn’t be passed in the regular session, so our then Governor Rick Perry spent millions of taxpayer money on 2 special sessions. That same bill is now being heard by the Supreme Court. Even in the secular community there have been some frank disagreements over whether the right to choose should be on the agenda. American Atheists President Dave Silverman once said at a conservative conference

“I will admit there is a secular argument against abortion,” said Silverman. “You can’t deny that it’s there, and it’s maybe not as clean cut as school prayer, right to die, and gay marriage.”

To be fair to him, he talked to not just me, but other secular pro-choice activists personally to hear our concerns. At his request I even did reports with the help of Youtube’s Philip Rose  that I published to the blog about the so-called  Secular Pro-Life group that was attempting to make inroads at AA conferences into the secular community. Since then AA has been making unapologetic steps in support of the right to choose. Amanda Knief, National Policy Director for AA, attended and reported on the testimony to defund Planned Parenthood.

One of the things that most struck me about the hearing was the lack of concern about women’s health. Republicans would say occasionally something about “protecting mothers” but the overwhelming amount of statements and questions from House Republicans focused on the idea that women are terminating viable, healthy fetuses for no reason. – See more at: http://www.patheos.com/blogs/nogodblog/2015/09/the-house-circus-over-planned-parenthood/#sthash.pd8JI9p3.dpuf

They have also taken a public stand for Reproductive Health on their Atheist Voter campaign website. And hopefully that trend will continue, and more secular minded people will support abortion rights, and it won’t be the wedge issue that divides us like the rest of the country. Of course, secular organizations like Center for Inquiry have made this their public policy just as a natural accompaniment with advocating for secular rights because the majority of attacks on reproductive rights have been for religious reasons.

It is a shame that, “Should abortion be legal?” is still a question that is up for debate after over 40 years. And politically motivated attacks by Right Wing Christians have inflicted grievous injuries on the ability for millions to obtain access to a safe, legal abortion. Conservative presidential hopefuls  are bragging about defunding reproductive health services like Planned Parenthood . At least in Texas that has come with millions of dollars in new Medicaid births that Texas and federal taxpayers foot the bill for.

I hope the secular community can get its act together and stand with reproductive health rights, and the rights of patients and their doctors to make health decisions without government interference.  I am actually going to debate the question, “Should Abortion be Legal” on October 9th here in Dallas’s Deep Ellum, as part of the Bible and Beer Consortium debate series. It could have been worse; the first debate question offered was “Is Abortion Murder?”

*Update 9/30: It appears the old question, “Is Abortion Murder?” is up on the debate organizer’s webpage. 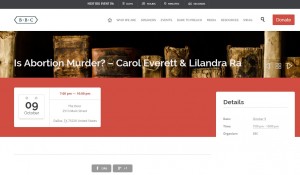 Carol Everett of Pro-Life Action League is a former abortion provider now opposed to abortion. Should be interesting, and hopefully I will see some of my fellow secularists for moral support there. Hopefully, I didn’t just provide a crib sheet for the other side.

Texas tackles Moses and the Bible in History Standards Again

Not ceding your platform to Alt-Right Ideology.

Three reasons not to raise your child to fear any god