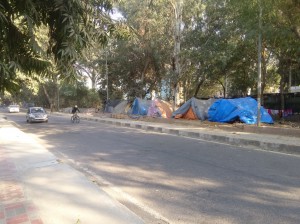 At different points around Delhi, I saw little tent communities like this one; where people literally live on the sidewalk -but with some privacy and shelter where they can actually sleep undisturbed and go about their day, earning enough to eat at least. I saw one of these rows of tents erected along a creek, and another where they were in the center median on the freeway. I’m conflicted about that. Because while that makes the homeless situation embarrassingly obvious, what does that matter when compared to the fact that tent and a sleeping bag can provide permanent shelter for just a few dollars over there? Is that not better than seeing elderly people freezing in their sleep on the sidewalks of government buildings in Kansas City? Does allowing this cause any harm compared to the significant issues that could be minimized? We did this in the states at our most desperate time.

Last year, one of my oldest and dearest friends was homeless. I kept sending him money when I could. But the cost of one night in a cheap motel could have bought him a tent and a sleeping bag. Then if I sent him another fifty bucks, it wouldn’t have to go for the same thing again. It wouldn’t only be for that one night. What you see here is better than having to hide in order to sleep in public without getting arrested. If we could find a space to legally permit and protect such an arrangement as depicted above; maybe in an open field or little park grounds somewhere with a public toilet, and reserve that for people who really have no other option, then I wouldn’t have to keep sending my friend another fifty bucks, and maybe he’d still be alive now.

Westboro in my neighborhood