When I first arrived in Delhi, I stepped out of the airport to see a blanket of fog in late afternoon. Fog is an early morning occurrence. So what’s going on here? At first the locals told me that the fog never lifts because it is winter and it is cold. But I don’t think 25° C / 78° F qualifies as cold. I kept asking about it, and the next few people said it wasn’t fog at all, but smog.

I grew up in Los Angeles in the early 1970s, before catalytic converters. So I’ve seen extreme levels of smog. But I’ve never seen it so thick that it fogged up the streets. The way the Indians deal with this is to only allow cars with even numbered license plates to drive on even numbered days, and of course odd numbered cars on odd numbered days. So everyone with the wrong plate for that day has to take one of the millions of taxis buzzing around. So they’re not significantly cutting down the number of cars on the road, and there’s just as much smog either way.

Of course I didn’t know any of that yet on my first day in Delhi. I’d just flown in from the other side of the world and never could sleep on a plane. So I went to the Four Points Sheraton, a nice enough hotel with a really good restaurant inside. The food there was the best I had my whole time in India.

The next day I flew to Vijayawada and stayed at a really posh hotel, the D.V. Manor. It was the only one with rooms available near where I needed to be. But even though that only cost as much as a cheap hotel in the states, I’d rather save money every way that I can. I have to, because my only income is posting videos to Patreon, and I really need more patrons. Every video I post in a given month earns hundreds less than the video before it. So I don’t make as much as my profile implies that I do, and I don’t really have money to spare. So when I returned to Delhi, I stayed in a much cheaper hotel in a really awful part of town, congested, noisy, filthy, where all manner of odors abound -especially at night. Many of the locals warned me about “Delhi Belly” and to eat from diners and street vendors at your own peril. 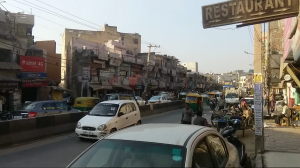 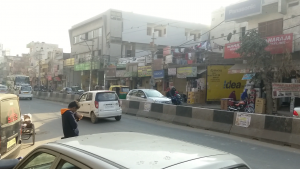 My first night back, the smog was so thick, you could see it in the glare of the city lights. It was so thick where I was that it obscured vision on the other side of the street. I met with a friend there who said that breathing that air was like smoking several packs of cigarettes a day. Maybe he shouldn’t have told me that.

The next morning, I noticed there was no hot water in my hotel room. But as I was taking a road trip to a different town and a different hotel, I decided I’d wait four more hours to take a shower. The first three of those hours were obscured in fog so thick that people had their hazard lights on. I passed three separate multi-car pile-up collisions in the same one mile of highway. But the eerie thing is that whenever I got out of the car, I noticed that the “fog” smelled like something’s burning somewhere in the distance. This appeared to be a combination of actual country fog and smoke. 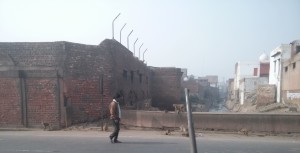 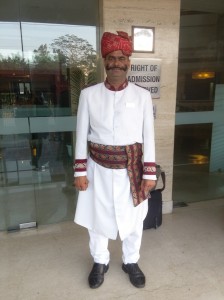 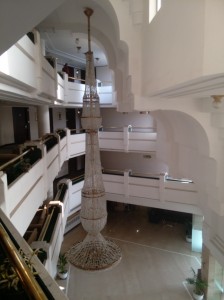 I booked the cheapest hotel I could find in Agra, and was very impressed at how nice that one was. Howard Plaza, the Fern provides excellent service and has a nice restaurant too. They even have a massage parlor! The hostess mentioned that after asking whether I was single. She might have meant to ask whether the room was for one person. But the two ideas were close enough that I had to wonder just how good a massage one could get there. Being a wise husband, I opted not to pursue that question any further.

The town of Agra is not pretty at all, but this hotel was beautiful. I couldn’t believe that I booked this place at such an online discount that it only cost me $18.50 per night! I stayed one night there, and saw the Taj Mahal the next day. But at some point I noticed that I was now coughing like a smoker. So that’s how I started to get sick. There was no smoke on the road back to Delhi. The sky seemed clear. Yet my cough was getting worse.

When I got back to the low-grade Impress Hotel, there still wasn’t any hot water. I had just spent four or five hours in a hot car where the cabby drove 50 kilometers per hour being passed by everyone while wearing a sweater and running the heater even though it’s 24° C / 75° F outside. I was feeling like I’ve inhaled an awful lot of toxins and I had a dinner date in a couple of hours, and I wanted a shower. So I asked the clerk to get me another room. Their bell-hop was sent to confirm that it’s not that I’m just too stupid to know how to turn the handle all the way to the red as opposed to the blue. I had already explained to them that the water is just as cold either way. But they acted as though I don’t really know.

The clerk told me, (as if this was something anyone should expect) that I just need to run the water for at least twenty minutes, and that it would eventually warm up. Immediately I remembered the DV Manor in Vijayawada. They had signs in the bathroom explaining the value of water conservation in terms of how many litres of water are wasted in some common practices like running the sink for that single minute that you’re brushing your teeth. Now I’m talking to a moron telling me to waste as much water as possible. I tried to explain to this clown in Delhi that if I run the shower for twenty minutes, I’m taking away everyone else’s water, and everyone else is doing the same thing to me. And that the only reason it seems warmer is because we’re now drawing from the pipes beyond the building where the ground is heated by the sun. But his comprehension of English or anything else seemed to impair any attempt at reason. And he had already implied that every room would have the same problem. So I ran the water for twenty minutes knowing that the temperature would not vary appreciably, and I took a cold shower.

I’ve taken lots of cold showers. I’ve swum in mountain lakes in Colorado and near the Canadian border of the Pacific. I could handle water much colder than this. Sure it’s January, but it’s India. It can’t be that cold, but this hit me differently. It did NOT help my situation. Somehow it caused me shivering chills that lasted all night, rolled up in a ball shuddering. I didn’t know why. I just thought I was in a weakened state due to inhalation. But this is how you prompt a certain secondary respiratory infection.

I asked the next couple of representatives whether any of the rooms in their hotel had hot water. They confessed that they did not run the boiler because it was too expensive to heat water all the time for a whole hotel, that they could save money by shutting off the heat (and not telling anyone). So if the staff all knew this, as they apparently did, then the guy who told me to run the water for twenty minutes lied to me. I was obviously irritated even before that confession. So management agreed that whenever I wanted to take a shower, all I had to do was to tell them about it a half hour in an advance and they would start the boiler up just for me. Fuck all those other guests, right?

So I arrive in Dubai, where everything is clean and the air is clear and the water is pure and the weather is beautiful yet my condition gets rapidly worse, violent coughing and shuddering chills despite having a temperature of 41.2° C, or 106.16° F. This in part because a cheap hotel, (which cost $12.00 more than an excellent hotel) wanted to secretly cheat their guests out of one of the most basic things we paid for, and then maybe lie to us about that.