I’ve been getting messages from out-of-state wondering WTF is going on with Texas’ politics, whether it is the governor shutting down Planned Parenthood and protecting their religious monuments, or the local cops plastering Bible slogans on their cars and telling secular citizens to suck it. To say nothing of what’s still going on in our schools -especially in rural communities, despite all our protests and against the advice of experts. Now we’ve got police departments hiring only right wing Baptists. No shit. We’ve got religion running and ruining everything, and we’re going to see what we can do about it. Vic Wang of Humanists of Houston and Amber Barnhill of Southeast Texas Humanist Alliance are hosting a religious freedom panel on Thursday to discuss violations happening all over the state. Both of them are part of the Texas Freethought Coalition, an alliance of secular community, ethnic, and student groups from all over Texas. My wife and I cobbled the TFC together after many frustrated efforts to do things like reason with the Texas State Board of Education. Joining us will be David Furlow of Americans United for Separation of Church and State, Randall Kallinen of the ACLU, and Dan Barker of the Freedom From Religion Foundation. We’ll see you in Houston. 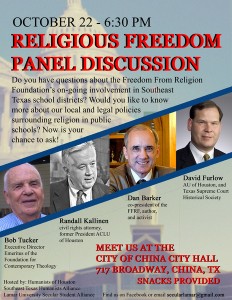 on the Israeli atheist convention