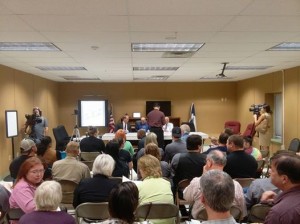 On Thursday, my wife Lilandra and I drove her car to the little town of China Texas for a Religious Freedom Panel. It consisted of representatives from the Foundation of Contemporary Theology, Americans United for the Separation of Church and State, and the Freedom from Religion Foundation. Attendance was full. The mayor was there. Local Channel 12 News was there. Even Faux News was there, though I can’t find any mention of the event online anymore. There was one story posted about it yesterday, but it is no longer available—like it never even happened. I’ll post more about that later.

It’s only a four hour drive home to Dallas, but we left on the wrong day. They were expecting heavy rains and flooding where we were in Houston, so we left before the rain came. But it was already dumping on Corsicana, over 13″ by the time we got close to there.

We saw an endless stream of brake lights on a dark and stormy night. Our GPS said there was a traffic jam, caused by the inevitable accident that always happens when it rains. It said we could avoid a two-hour delay by taking a farm road around the tiny town of Richland. Dozens of cars had obviously been following those same directions. But when we got there, we found that road was under water. So was the alternate route. I ignored the GPS and tried to direct her on another route, but that didn’t work either. Lilandra tried to turn around in heavy rain with no street lights and very poor visibility. Her GPS said she was on a road that didn’t actually exist where we really were. It was flooded in straight lines on both sides and in our headlights it really did look like the block-long road that the GPS said it was, but she was actually driving into a field. It looked like a road, but it was just a soaking wet field of short grass in mud, and we did not quite make it to the other side. We wouldn’t have made it even if we had all wheel drive. 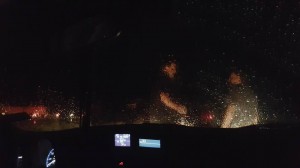 Someone who lived in one of the nearest houses a block or so away just happened to be looking our way when we got bogged down, and that guy just happened to have a 4×4 pickup with mud tires and a 40′ tow chain in the back. So the FSM was really looking out for us at that moment, or we would have spent the night there. By the time he got us out, the whole field was under water.

We were only a few yards from from the railroad tracks, and we heard the train go by right behind us while we were stuck. Shortly thereafter, the news reported that the train derailed not far from where it passed us. Imagine that. A freight train was washed off the tracks by a flash flood! 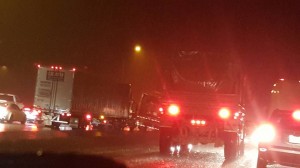 So imagine what was happening on the highway. It had become a parking lot. Lilandra wanted to wait it out in a rest stop that we passed, but I wanted to press on. Soon we were among thousands of cars just sitting still on the frontage road as National Guard trucks passed us by. Finally I googled the news about what was really happening. Interstate 45 Northbound was under water, both there and coming into Dallas too. Where the freeway was now closed off, some people had to be rescued from their cars stranded in the flow over the road. Four people reportedly didn’t make it. We realized nobody is getting home tonight. So we started the car, and turned around on the feeder road to go the other way.

We were on a three-lane interstate between two major metroplex areas, but this part of Texas is still really remote. There was nowhere to go. Traffic was backed up for twelve miles. Assuming an average of ten yards per car, I figured that was over 6,300 vehicles that weren’t going any further n0rth tonight. There was only one gas little station in Richland, one that had only four pumps and one bathroom. There were twenty people in line for the toilet and roughly fifty cars in line for those pumps. The rest area a couple miles down was overflowing with cars parked all along the side of the road.  We soon found out that all traffic was being turned around as the interstate was impassable. So we actually got a head start over most of the others. This time I drove as Lilandra called ahead and found that all the motels in the next couple towns were booked. We got the last room available forty miles down the road, near the dead zone where there’s no cell service anymore. A lot of people were advised to find a place to pull over and just sleep in their cars, because there was nowhere to go, and it wasn’t safe to keep going either, since the rain wasn’t letting up.

All that was caused by a cold front that had been stalled by another pending disaster. The story I saw said that if the Hurricane scale hadn’t been capped at category 5, then Patricia would have qualified as a category 7, being the strongest hurricane ever recorded in the western hemisphere. This was attributed to unusually warm oceans. That’s what global warming predicted; more extreme weather conditions. My wife used to live in Houston. She knows what hurricanes are like. I’ve only seen tornadoes. Patricia was both, because she had sustained winds of 200mph when she hit Mexico last night.

As I write this, I-45 has been open for two or three hours, (don’t ask me how) but there are lots more flash flood warnings for the whole way home. It’s still raining constantly and often heavy. It was pounding the building when I tried to convince my wife that we should take this window of opportunity and go before the highway floods again. But she won’t risk it because of the number of those who died on flooded roads the last time we got a really hard rain. This is already the most rain we’ve ever had in one weekend—with even more bearing down now from [what was] a world record hurricane. So thanks Obama.

Are You a REAL Christian?