In my debate with Bob Dutko, he criticized me for not debating the existence of God -which was my choice of topics from the selection he gave.  I wish we had been able to talk about that, but instead he wasted most of that hour burning and re-building his strawman of my position while ignoring every correction.   There is a heckuva lot that should have been said, and I guess I was naive in imagining that there could have been any serious discussion of that topic on the level I wanted.

It has been my experience that whenever creationists claim to have evidence supporting their position, they invariably don’t, and the absolute best they can do is to complain about imagined inconsistencies in REAL science.  Apart from citations of misquoted abstracts, misunderstood and misrepresented, all they can do is jump to fallacious assertions or fraudulent forgeries.  Beyond that, they’ve got nothing, and I’m sure that will be the case with Dutko too.

For example, I challenged him to produce evidence indicating his otherwise unwarranted assumptions.  He said he had that, but what he failed to produce it.  Instead he gave a number of citations which he said would reveal unfossilized hadrosaur bones in one case, and another was a cache of swords allegedly bearing a precisely detailed perfectly flawless rendering of a sauropod dinosaur.   I don’t remember the other claims he made at that time.  Nor did I copy them down then.  My intention was to pull the recording and review the articles he cited.  But I just got confirmation that there will be no link to any archived recording of my debate with Bob Dutko.  So how do we hold these people accountable?

I already know for certain there were never any unfossilized hadrosaur bones, and I said so at that time, but I don’t remember the paper he named that he said would support him.  I never heard the bit about the flawless sauropod renderings on swords either.  What oriface did he extract that from?

One that I was already immediately familiar with was the pigosaurus in the Cambodian temple at Angkor Wat Cambodia. 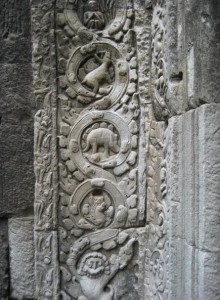 You will notice that this highly ornate column has decorative petal patterns adorning practically everything, including the animal in the central circle.  As you look more closely, you will have to notice that the animal in question is definitely a mammal.  Some think it might be a cow or a rhino, but personally I think it’s supposed to be a pig.  Whatever it is, it apparently has either horns like a cow or the ears of a pig, and the sort of diminished dangling tail one would expect to find on any modern animal with hooves. However Bob Dutko insists that this is stegosaurus.  Dispite the fact that a stegosaur would have a tiny head and a long tail with a double row of spikes on it, and disproportionately long back legs with long clawed toes, and this doesn’t match any part of that body plan    This is obviously a modern ungulate mammal super-imposed onto the same petal pattern as everything else in this temple.  Apparently Dutko can’t tell dinosaurs apart from barnyard animals, yet he accused me of ‘fooling myself’ when I can’t fool myself into believe this is something it doesn’t resemble and isn’t what it obviously is.

If all his arguments and all his evidence is really this weak, then it’s no wonder he won’t keep an archive of his shows and has no way to accept correction on any point.  His need to believe far outweighs any desire to understand.

30 thoughts on “No saved recording of the Bob Dutko debate”

Why did I think I could watch this video about Fish Tongue Eating Isopods?