To get to the World Atheist conference in Vijayawada, I had to connect in Delhi. Having never been to India, I arranged a layover. A friend who lives there hired a car to take me to Agra for the purpose of seeing the Taj Mahal. If I’m in India anyway, I may as well see that, right? 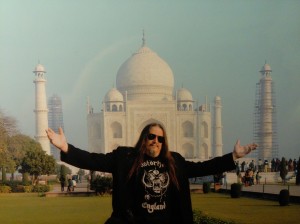 When we arrived, the cabby picked up a guide. That was his idea, and I thought it was a good one, since I don’t know what all there is to see there. He did show me Fort Agra, and that was impressive. But everything else he took me to were to see how they made their marble tables, silk garments, silver jewelry, and hand-made rugs; things I really don’t care about. In each case, I was given a cup of chai and talked up to buy things I didn’t want. The guide’s job really was to drag customers into these various shops.

I don’t like salesmen to begin with. If I want something, I’ll come asking for it. If you have to sell it to me, then we’re starting from a point where I don’t want it, and that’s not going to change. But these guys don’t take no for an answer until you show signs that you’ve lost all patience. If I ever go back to India, I want to wear a tee shirt that says, “I won’t give you any money” written in Hindi. If the beggars in the street aren’t bad enough, the salesmen are worse. At least I have some sympathy for the beggars.

From where we live in Texas, the direct opposite side of the earth is somewhere in the Indian Ocean. So when my wife and I went to the beach in Perth Australia last year, we were as far away from home as we could be and still be standing on dry land. But Perth looks an awful lot like some towns in the states. If it weren’t for the fact that the cars are on the other side of the road, it would look like the US. Especially since those cars are going to McDonalds and Subway. Every country I’ve been to, except maybe Iceland has Subway sandwich stores. My wife and I always joke whether their sandwiches are like the ones we get back home. The joke is that it’s the same thing everywhere. For that reason, I wish we could visit these places back in the 1930s, when everywhere was still different. Well, parts of India are still like that, Agra especially.

Did you know that India is 80% Hindu? There are 800 million of them here. That means there are more Hindus in India than there are Protestant Christians everywhere else. 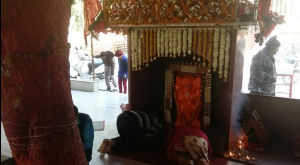 At my request, the guide took me to a Hanuman temple where I could see people worshiping the monkey-king. That was good. But otherwise, what I wanted to see of India was women in traditional saris and Sikhs in turbans, as well as cows, camels, and monkeys in the street. I wanted to see buildings, people, and culture that I can’t see back home, nor anywhere other than here, and I saw all of that from the window of my cab. This was the part that was most interesting to me.