For the last three elections in my senate district, Democrats have had no candidates. There has only been a Republican running uncontested. Well, there was a Libertarian once, but they’re like Republican-lite, and he only got about 10% of the vote. So following Bernie’s advice, I decided to run just so it wouldn’t be like that again this time.

But it’s not like that this time. Although I’ve never identified as a Democrat, I decided to run as one, because a lot of people will just vote straight down party lines, especially if they don’t know anything about who’s running. So I was the first Democratic candidate in this district in the last decade or so, but others quickly jumped in. After having no Democrats at all for three election cycles, we suddenly had five of them all at once. In fact all the political groups I met with reported that after Trump won the electoral vote, each of these groups had seen an awakening of the masses with more new volunteers, donors, and first time candidates for every imaginable office than any of them had ever seen before.

Now I knew going in that my campaign was a long shot to say the least. This district is very rural, very religious, and very red. In the last Republican primary, the challenger accused the incumbent of being inspired by Satan, and they were both conservative Christians! The last time there was a Democrat in the running, the Republican still won by a landslide with over 80% of the vote: and both candidates were Christians then too. So my campaign was not well received, not even by the Dems. In fact I was grilled about my atheism at the very first Democratic meeting I went to launching my campaign.

I and volunteers helping out had contacted all the local news agencies, and they all knew how to reach me, but they weren’t going to. Strangely they ran stories about the rock drummer and the gay leather bar owner both running for governor, and all the openly LGBT candidates running for state house, but they weren’t even going to talk about an atheist running for the Senate in Texas. One Newspaper responded saying, “We will never run a story about an atheist because our readers are Christian”. But they did run a story about my opponent in the Democratic primary, even though he is yet another straight white Christian man.

One thing I said since the beginning is that if I do nothing else, I would drag this district to the left. Because the incumbent is a self-described “Tea party believer” who was all about building that wall and banning trans people from using public restrooms. It would have been so much fun to debate such an ignorant and bigoted religious-right wing-nut! He is so far out in the extreme that the Republican party is embarrassed of him and wants to trade him out for someone more reasonable. So they’re running another candidate against him, the wife of a popular Attorney General. As I understand it, she is already favored to win, even though the incumbent raised over a half million dollars to win his seat last time. She is expected to raise at least that much too, being favored as she is by her party. 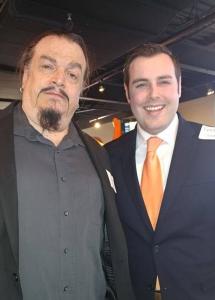 So the Republican party is backing a new contender. I think the Democratic party is backing a new contender too, and it is not me. When I threw my hat in the ring, I didn’t expect there to be a primary, because I didn’t think anyone else would run. But this time they did. And while three of those other candidates dropped out or decided to run for a different office, one of them is still in, and people on my team have described him as “a formidable opponent”.

Although Kendall Scudder is very young, he’s a very polished politician. It’s like he was born to do this. He’s also a much more traditional politician, and thus far more appealing to the establishment than ever I could be. To my experience, the Democratic party does not want to support a self-described Bernicrat any more than many Republicans want to support another Tea Partier.

The other problem with running for office, at least for me, is that it’s all about raising donations. I read that money in American politics is such a problem that once a candidate is elected, all they have time to do after that is raise donations for the next election. In the United Kingdom, they’ve curbed that with a law that you’re not allowed to spend more than ₤30,000 on your campaign. But in this district, the Democratic party told me I would need a minimum of $30,000 just to start with. Then soon into the race, they raised that figure by another order of magnitude, and then doubled that–because of the increased interest this time around.

For someone like myself who already lives on patron donations to Patreon, it’s hard for me to keep asking for people to give even more money: especially when it’s THAT MUCH money, and I know how slim my chances always were, even if there wasn’t a Democratic opponent. I’ve been mulling this over for a couple months. It really hit me after the Caribbean hurricanes and everyone was trying to fund relief for Puerto Rico. I was already trying to raise money for the US Virgin Islands. How could I ask them to give me money at the same time?

So I re-examined the value of running for this office this time around. I knew my campaign was against all the odds when I jumped into this, but those odds have not improved. At this point, there is no reasonable possibility of winning. If I was the only Democratic candidate in this race, I’d still be in it to win it. But as it is, there is another candidate who has a much better shot at this than me, and he’s got the backing and publicity that no one is willing to give me.

I’ve talked to Kendall Scudder at several political gatherings, and I don’t see a thing wrong with him. One of the first things I said when I addressed a political gathering with him was “I don’t know how I’m gonna beat Mr Fresh-Face here”. That got some laughs even from him. Honestly though, he’s one of the best political candidates I’ve ever met. He even started a Secular Student Alliance group in college! So I’d have no problem voting for him a year from now.

If the goal is to unseat an irrational bigot and turn this district blue by electing a reasonable person who actually understands things like the First Amendment, then given the situation as it is, there is no need for a pair of progressives to waste funds fighting each other for the primary. The only rational thing to do, now that things have changed, is for me to drop out of this race and throw my endorsement to Kendall Scudder for Texas Senate District 2.