Lilandra and I will be going abroad soon, touring 15 countries in six weeks, starting next week. So we took advantage of the option for early voting while we’re still here. 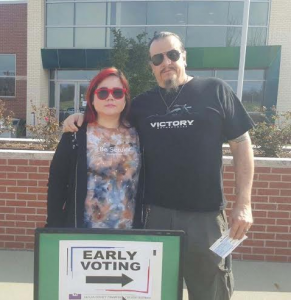 In Texas, we have to register to vote, and we have to show ID. Sometimes women have even had to have legal proof of the change/return to their married/maiden names. Your vote counts so much that they’ve gerrymandered this state worse than most. We voted for Bernie in this Democratic primary, in a state where polls still show Hillery 23 points ahead.

This election has been the most fascinating one to my memory. I don’t realistically see a Republican winning this one. But it is still possible if Hillary gets the nomination. That’s not my motivation though. If there were no Republicans,  and was just down to Hillary and Bernie, I would still be motivated to vote early and often and to inspire others to do likewise.

Because Bernie is the first candidate I’ve seen whom we can show genuinely cares about human rights issues all along, going way back. And he’s also genuinely concerned about addressing anthropocentric climate change. I had to wonder why the environment was never even been a topic of discussion way back in the 1988 election. It’s time we catch up on that. California has much improved since I lived in the smog and litter and filth of Los Angeles in the 1970s. The rest of the nation should follow suit. The longer we wait, the worse a problem that will be, until it becomes our biggest problem ever. Then there’s the economy. While loads of people moan that we can’t afford it, we certainly can, and 170 top economists have already endorsed his plan. We also have plenty of precedent to show that many of his proposals have always improved the economy whenever or wherever else they were implemented.

Now I know Hillary’s past positions, and that she has recently adopted many of Bernie’s policies -because he is doing so well. Many years ago, she showed a pattern of decision making that wasn’t based on what is obviously right, but what is popular among particular constituents, and of course what her sponsors will endorse and support. In my opinion, establishment politics has never had a more obvious puppet to promote corporatacracy, and that is a huge concern for me; as someone who believes in the ideal that this country was founded and has fallen away from. Yeah, I know, Republicans say that too -without having any idea what they’re talking about.

Ultimately, I want our next sovereign leader to at least try to establish a national health care system that is better than we have now, although I appreciate that we now at least have that. I also want a president who doesn’t want to kill our military people, and will seek advisers for diplomatic solutions. That, it seems, is something only Democrats can do or want to do. If you think both parties are the same, you’re wrong. The issues on the ballots for both parties don’t even compare to each other. That’s how different they are. For the last several years, I’ve seen a growing list of Republicans denying this beneficial program, or blocking that reparation,  restricting science, perverting education, impeding progress, and facing pending arrest.  To say nothing of on-going attempts to promote theocracy whether at the state or national level. You just don’t see all that from Democrats, not even the stupid ones. But with Republicans, it’s typical: it’s become the norm. Hillary is obviously better than any of them, but Bernie is still a lot better than her. So if the best man loses, I’ll hold my nose and vote for Hillary. Because the Republican alternatives this year are beneath us all. But I want Bernie to win, because he’s genuine, and he is certainly NOT anyone’s puppet. 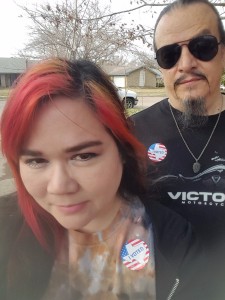 So if this primary is the only time I ever get to vote for Bernie, at least I did my part. Vote early, vote often, and don’t forget about the lesser offices. They matter more than it might seem. And if you think your vote doesn’t count, then you’re part of the problem. If you’re progressive and secular, and you don’t vote, know that the church congregations still will -as a bloc, just as their pastors tell them to do. So your lack of vote = a vote for a conservative neo-con who wants to put their religion in charge of all your affairs.

I want a president who listens to scientists instead of astrologers, witch-hunters, and hate mongers. That’d be a nice change, to have a president who doesn’t thank God for everything -or anything. Even if there was a God, I still wouldn’t trust him to take care of anything, since so much shit has already gone bad on his watch, and he has never EVER done anything other than receive credit for the work that others have done.

How crazy is religion?

iERA Statement in Light of the Woolwich Attack