I had a short speaking tour of Florida, giving a Darwin Day presentation in Orlando, Fort Lauderdale, an 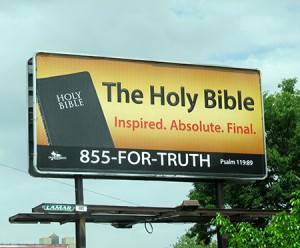 d Fort Myers, and we recorded three episodes of The Place while passing through Pensacola. So we took a road trip out of Texas, through Louisiana, Mississippi, and Alabama. Along the way, I kept seeing these billboards pleading with me to call and argue with them.

The first call was amusing enough. I talked with Johnny about how Jesus was reportedly a 1st century faith-healer who believed in demons, and who’s understanding of theology was limited to whatever mere human scribes had written before him. Johhny brought up the prophesy of Isaiah which was supposedly fulfilled in the book of Matthew. So I explained what that prophesy actually said, who it really referred to, and that this pertained to people and events that were seven centuries too early. After I explained all this, I asked him if he would admit that the prophesy in Isaiah 7:14 could not possibly be talking about Jesus. Johnny reacted by raving about how Jesus died on the cross and we need to confess our sins and all other irrelevant nonsense. And when he stopped for a breath, I pressed him again, saying “Whatever, regardless, do you admit that Isaiah 7:14 cannot possibly refer to Jesus?” He didn’t answer. He just hung up on me.

That was a funny call though, and I checked to see if I had gotten a recording of it. But sadly, my automatic software didn’t file it properly, and it was irretrievable. So I corrected the settings. 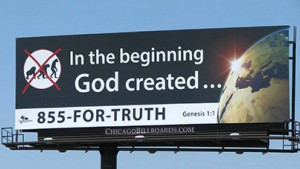 Later on down the road, I saw another similar billboard, and was moved to call again. This time I talked with Ron. I challenged Ron to show me anything in the Bible that he could show to be true and thus qualify as truth. He said he could do that, but that I wouldn’t accept it. Turns out he thought he had evidence that evolution was a fraud, and he thought that meant that the Bible is true as the only option by default. Even worse than that, his evidence against evolution was “when you look at creation, the sunset, or DNA, you realize there has to be a god”. Seriously, that was his “evidence”–both against evolution and for creation. That’s it. The logical fallacy of question begging was all he had. When I started to point that out, he hung 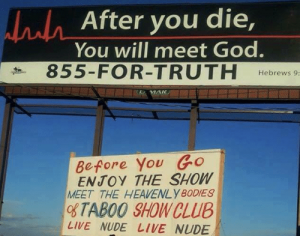 Another few hundred miles down the road, there’s another of those fucking billboards. So I called again. This time I spoke with Roger. We went through the same basic intro as the other two calls and finally got into the meat of whether he could show me the truth of anything he believed, meaning was there anything he could show that was actually true. I tried to remain polite, but Roger’s only talent was talking over other people no matter how they may try to interject. That was when my wife, Lilandra took this photo. 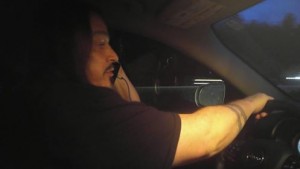 The caption she added was what I had just said at that moment. “You’re very good at talking over me but I am going to finish this.”

Amusingly, Roger figured out who I was once he realized that I knew what I was talking about. He asked whether I had spoken at atheist conferences. He said he had seen some of my videos and recognized my voice. Yeah, but he didn’t learn anything, did he?

Roger’s favorite fallacies were false equivalence and projection, reversing the definition of faith into a belief that is based on evidence. He also argued that science requires faith whenever we don’t know something for 100% certain. Although he refused to accept any correction to his errors, I eventually worked passed that. I told him how once we figured out the real explanation for anything that was once attributed to the supernatural, it always turned out to be a revelation of whole new fields of study that were previously unimagined. Then I challenged him to produce even one occasion in history when the supernatural explanation ever turned out to be right. He said he knew of two such occasions. One of them was that no one can explain the origin of life or how Jesus rose from the dead. Yes, his fallacy was the god-of-the-gaps argument, that if you can’t explain it, then it must be magic. It didn’t matter how eloquently I explained the big bang because I still used too many big words and sciency concepts. It also didn’t matter that his only evidence of Jesus rising from the tomb was the total lack of evidence that he was ever there in the first place. He got really animated at that, and so did I when he kept yelling over anything I tried to say. But to his credit, he didn’t hang up on me. I had an important call, and told him that I had to take it, much as I would have loved to continue that argument. That call lasted more than an hour, but my phone only recorded the first 16 minutes of it.

When we were half-way back to Texas, we saw yet another of those billboards, and again I could not resist the bait. This time I spoke with Phillip, and my phone managed to save the entire conversation.

Somehow Phillip knew who I was immediately, even though I never gave him my name. Seems Roger must have flagged my number in their network. Either that, or they’re on a chat network and Philip typed in that he has a caller who thinks and knows things and doesn’t just believe. So pretty soon I got the impression that he was being coached remotely.

Philip also saved my number and texted me some time after our call. I told him that his questions required more than I wanted to tap out on a text message with my thumb. I told him I would compose a blog post to explain all this and to address his questions. So from here on, this post will be an open letter to Philip @ gospelbillboards.org

I could have started with your own company, or the article you referenced regarding Zivkovik, since there were a handful of immediately obvious lies in that one. Most of those were explained in the 13th chapter of my book on Foundational Falsehoods of Creationism. Since this blog post is already quite long, and I have other engagements pending tonight, but I promised I would reply to you today, then I’ll post as it is now. But I won’t be able to get to your most recently posted question about Henry Morris Jr., Jake Hebert III, and Jason Lisle until my next post tomorrow. It’s easy to cite lots of things each of them said that are obviously and demonstrably wrong, but it takes a bit longer to show how we know that they knew that what they said was wrong when they said it, and I want to make sure there is no doubt about that when I get back to you. Until then remember that there is no truth in creationism, but there are a helluva lotta lies.

My schedule at the moment