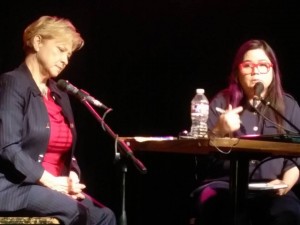 Last week Lilandra debated Carol Everett of the Pro-Life Action League. I was proud of how well my wife did on stage. Although there were a few theistic critics in the live audience, the comments we saw online were exclusively positive and supportive of Lilandra’s performance. The event was hosted by the Bible and Beer Consortium, who invited her to debate again next year.

It’s funny to me that this was Lilandra’s first debate, because I’ve still never had one. I know a few other people who seem to have debates every week, and many people think I’ve had a lot of debates too. But the most I’ve ever done was to argue with a few zealots on Christian radio. I’ve never been on stage with a live audience and a moderator. I’m hugely envious of Brian Sapient of the Rational Response squad for being able to debate Cameron and Comfort on national television.

I was asked to debate someone in Lufkin Texas a couple years ago, and I was eager to do it. But as I explained in a previous blog post, they cancelled that debate. Once they looked me up, my opponents refused and the venue withdrew. They didn’t want me denigrating religion in their extremely conservative rural southern town.

More recently, I was asked to speak at Oakland University in Michigan, and they decided they would rather see a debate than a speech. Actually they were told it would be easier to raise funds for a debate. Again I was happy to do it. But after a week or so, I doubted whether it would really happen. Once again, they scheduled me before securing an opponent. So I inquired back and was told that a few religious student organizations were interested in doing it. OK, but I began to wonder, have they looked me up yet? I’m guessing they hadn’t by then, but they have now. I was just told that the debate has been cancelled, because the student group that wanted to bring me in can’t find anyone to work with them, and that now they’re being denied event funding. History repeats itself. I don’t know if any of the reasons are the same, but I saw it coming none the less.

I should add that on the same night that Lilandra had her debate, the famous fraud, Kent Hovind was in town. Some people wanted me to debate him too, again on the radio or on a Google hang out. I refused because he’s just an irrelevant snake-oil salesman unworthy of attention. But when I heard he was coming to Dallas, I couldn’t resist the temptation. If he was going to debate anyone here, it should be me. So I had intended to confront him at his church gathering -until they scheduled my wife’s debate at the same time. Obviously she takes priority. Kent was doing another local seminar the next morning, and at first I intended to crash that too. But then I heard a podcast where (at 15:45) Hovind told one of his followers to offer me $500.00 to show up. Then I decided to sit back and wait for the offer which I knew would never come. Since he made the brag but never put his money where his mouth is, (typical) I certainly wasn’t going to show up for free anymore.

However the Bible and Beer Consortium assures me that they certainly will have me debate some “reputable source on the topic of Intelligent Design”. That’s impossible because no such person exists. There has never been a credible proponent of any brand of creationism anywhere ever. I think what they meant by that is they hope to have me debate one of the higher-ups at the Discovery Institute or someone like that. This should happen sometime between May and October of 2016. We’ll see.

Bouncing around the weekend