Someone in Scotland was asking me, “We have all heard that Texas is a Minority Majority state, and that it is going purple then why are you still having problems with theocratic legislation?” (Paraphrasing it was a while ago) First this: people in Scotland know many more details about our state’s politics than we do about theirs. Just to give you an idea about how people in other countries watch Texas not just for the buffoonery, but also out of genuine concern for the people doomed to ignorance by regressive education policies. Also, Texas has an unfortunate tendency to churn out presidential dynasties that invade other countries over oil and mess those countries up worse than they were before at the drop of a cowboy hat.

But in answer to her question, off the cuff I told her that purple and blue Texans have something similar to Stockholm Syndrome. They are used to since Lyndon B. Johnson and Jimmy Carter(both Southerners maybe Texans thought they were Yellow dog Democrats) voting or watching on the sidelines futilely while yet another yahoo Republican wins the seat of power. They have been repeatedly bashed upside the head with the mantra, “Silly rabbit Texas is for Reds!” (embellished a bit there, but that is the gist)

It is a bit more complicated than that as the last state elections blue turnout was actually worse than when Rick Perry was reelected the cycle before.

Yes, the blue and purple people of Texas have reasons to be discouraged about voting here. What is more there have been monumental efforts to suppress their votes here through gerrymandering. 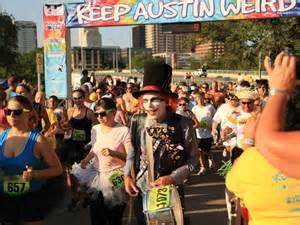 But seriously check out Austin:

The saving grace in this is voter turnout, because the tide of minority voters is irreversible. High voter turnout is required to counteract voter suppression. In Arizona, the Supreme Court just upheld a voter referendum that created an Independent Bipartisan Districting Committee 14 years ago. The Arizona GOP took the Districting Committee decision all the way to the Supreme Court when its decision didn’t favor them. Putting a referendum on the ballot for this in Texas would be needless to say incredibly unpopular with the GOP. But in the future should they find themselves in the minority, I am betting they will think they invented the idea after they invented sliced bread.

So where are the blue and purple voters of Texas? The mighty Aron Ra and me will be talking to a few of the influential ones from all over the Great State of Texas tonight at 9 PM CST on the Ra-Men Podcast. Among them the ebullient Zack Kopplin, multi-tasker Vic Wang from the Humanists of Houston, the outspoken Russell Glasser with the Atheist Community of Austin,the undaunted Jamie Farren of the Freethought Oasis of Amarillo, freethought leader Alix Jules of the Dallas/Fort Worth Coalition of Reason, and of course the friendly Mark Nebo.  A few people have contacted me, because public education has just been dealt another blow here by the newly elected Governor Greg Abbott’s appointment of yet another in a long line of fundamentalists to Chairperson of the State Board of Education -homeschooler Donna Bahorich.

And don’t think we didn’t notice that freshly minted Texas history books prominently featuring the theocratic, dictator Moses as an influence on our government just now are coming out to classrooms. Bonus a new generation of white supremacists like Dylann Roof will get to learn that the Civil War was fore-mostly about State’s Rights! Why doesn’t anyone ever read the fine print on secession documents? It was about the state’s rights to own slaves. Here’s Texas’s:

We hold as undeniable truths that the governments of the various States, and of the confederacy itself, were established exclusively by the white race, for themselves and their posterity; that the African race had no agency in their establishment; that they were rightfully held and regarded as an inferior and dependent race, and in that condition only could their existence in this country be rendered beneficial or tolerable.

Tonight you will see a  few of the blue and purple Texans, who will discuss what’s wrong with Texas, and what can be done to fix it.

6 thoughts on “The Purple and Blue People of Texas”

FBB fund against the Texas twister

The only minority Juror B29 leaves justice for Trayvon up to god.