Obviously not in the way the original colonists, many refugees from religious persecution, did to the indigenous peoples of the Americas.  But like Abraham Lincoln did on the first official Thanksgiving in celebration and gratitude  that Gettysburg, the deciding battle of the American Civil War was over.

Although the Syrian Civil War ravaging people’s lives is not over, this site will direct you to websites where you can share some of your good fortune. If you can’t, even sharing this information would be helpful.

Many of us are able to provide for our families and can help with Syrian families who can’t through no fault of their own. Even if you are like Thomas Jefferson, and don’t believe in National Prayer Holidays in a nation with a secular government, that doesn’t mean that you can’t celebrate a secular Thanksgiving or feel thankful and show goodwill to the less fortunate. 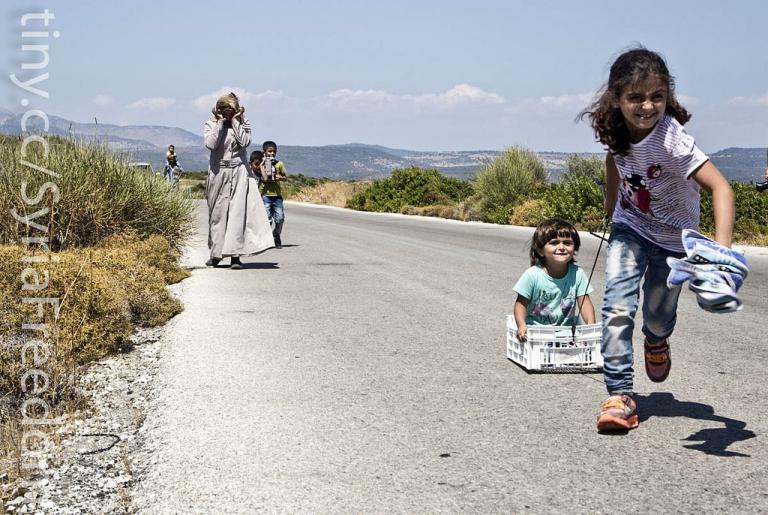 “A Syrian migrant girl from the town of Raqqa tows her brother making their way on foot from Sikaminea on the southeastern Greek island of Lesbos, Greece, Aug. 21.” Public domain

None of the charities linked to on the Thanksgiving For Syria Website promote or even mention religious beliefs, so if not contributing to forced proselytizing by charities is a concern, the site is freer than many. For example, The Migrant Offshore Aid‘s mission is to search and rescue refugees.

Secular Community Fundraiser for Orphans of the Smith Tragedy

Ani DiFranco and white feminist gate-keeping to the point of absurdity.

Michael Nugent on choosing not to make a jerk of yourself.