Somehow I happened across a Facebook post criticizing me and anyone who “follows” me, whatever that means. I couldn’t comment on that thread, but it made some interesting claims that I think should be publicly addressed. 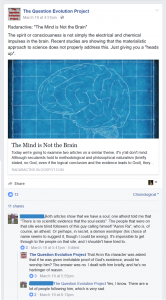 The Question Evolution Project appears to be the same entity as the blog author, Piltdown Superman. So he is only citing himself. His website is a string of obvious falsehoods easily refuted, and his linked blog post opens with the following idiocy:

“Although secularists hold to methodological and philosophical naturalism (briefly stated, no God, even if the logical conclusion and the evidence leads to God), they still search for non-material concepts like free will and the soul. By doing this, they’re inadvertently admitting that their worldview is inconsistent.”

First of all, the reason he thinks this is inconsistent is that he has absolutely no idea what he’s talking about. First of all, we’re not talking about a world view, not a single one anyway. Because the author doesn’t know what secularism is. He’s got that confused with strong atheism. He’s described that incorrectly too. I’m a strong atheist, and I would never ignore whatever the logic or evidence indicates. That would actually contradict the core of my philosophy and the very reason I am atheist. For me, accuracy and accountability are paramount. The only value information has is however accurate you can show it to be. If you can’t show that it is accurate at all, then it has no value at all. It is just an empty assertion. So it doesn’t matter what you believe; all that matters is why you believe it. And in my extensive experience arguing with believers, even starting out as one among them, I am confident that there really is no physical evidence or logical reason to support the god belief, and this post will be just one more in a long line of demonstrations to prove that.

Secondly, he doesn’t understand the distinction between the material and the immaterial. He thinks that mathematics and consciousness are immaterial, and thus “supernatural”, [magical]. But consciousness is physically discernible and chemically malleable, and the mind cannot exist without a brain to create it. Some of his other examples may be conceptual, but does he really think that his god is only a concept? That God doesn’t have an existence independent of human imagination? I would say that it doesn’t, but a believer should argue that it does. In which case, the real distinction is between the natural and the “supernatural”, being what believers imagine to be a super-imposed alternate realm where magick works and the laws of physics don’t apply. It sounds exactly like living in a dream state, and I think that is because it is just a dream: something folks just dreamt up, or took too seriously when they woke up, when they didn’t yet know how to distinguish their dreams from the real world.

Thirdly, a secularist is anyone who understands the importance of the wall of separation between church and state. That means Thomas Jefferson and most, if not all, of the founding fathers were secularists: even though most of them at least were also religious to some degree. Some of them even identified as Bible-believing Christians. But they understood what tends to happen whenever the government adopts or endorses one particular religion over all others. Those of any other religion are then forced to acknowledge or even bow to the state religion–such that their own sincerely-held beliefs are restricted or suppressed. This effects freedom of speech too, since theocratic states also tend to criminalize blasphemy, often as a capital offense facing the death penalty. Jews, Quakers, Sikhs, and a few other historically unpopular religions have already faced this type of persecution just within American history. Mormons for example have survived an unconstitutional extermination order issued by the governor of Missouri in 1838 and which was not repealed until 1976! Initially American militias were murdering Mormons simply because of their beliefs. So the Mormons know better than most Christian denominations why secularism is such an important right in the first amendment. But there were a helluva lotta other religious people then and ever since then who have been and still are secularists. That means they defend both the establishment clause and the prohibition clause of the first amendment, because they know why it is impossible to enjoy freedom of religion without also having freedom from religion. Any religious person should be secular if they value their religious freedom and want to keep it.

Since the overwhelming majority of secularists historically and currently hold faith-based supernatural beliefs, that means they do NOT “hold to methodological and philosophical naturalism”. Those are different things by the way. Methodological naturalism can also be interpreted as the scientific method, requiring that all postulations must be backed by supportive evidence and that all hypotheses must be testable, being either demonstrable or potentially falsifiable. This allows only natural explanations because there is no way to test, demonstrate, or disprove the supernatural. And if you can’t do that, then you can’t even know whether you know anything; much less how to identify the errors in your current perspective in order to correct them, which is the only way to improve understanding. So we can’t say that if science can’t explain it, therefore it musta been magick. Even if it was magick, that still wouldn’t explain anything. And every time that explanation has been used in the past, it always turned out to be wrong later on.

So methodological naturalism only applies to scientists, regardless whether they’re secular or not, and not all of them are. Not all atheists are secular either, surprisingly. But philosophical naturalism is something different. It is the opinion that there is no “supernatural” to talk about; that all of that is just an unsupported assertion with no determinable reality and is thus indistinguishable from the illusions of delusion, something someone just made up. If there is no way to show the truth of it then there is literally no truth to it. That is a completely reasonable and logical conclusion given that the elementary rules of logic are that extraordinary claims require extraordinary evidence and that what is asserted without evidence can also be dismissed without evidence. However, not all scientists agree with this either, as some of them still have compartmentalized faith that there is a god. Not even all atheists agree with that, as many of them, (myself included at one time) thought there might be evidence for some supernatural something possible somewhere that we just haven’t found out about yet. Now I know that such is literally not even possible.

Some secular philosophers ponder notions like free will and some believe in a soul, by which they mean something more than merely consciousness. But one cannot honestly or fairly say what Piltdown Superman said above. It’s unintelligible nonsense because he doesn’t know what any of these words even mean. Not even his use of “harbinger” makes sense in his sentence.

So I’m not going to correct the rest of his article. How can I when there is so much wrong just in the first paragraph? Given that, I think I should take the fact that he criticized my reasoning as a compliment because he doesn’t seem to have any reasoning of his own. But since he felt that insult was warranted, then what I will do–in the spirit of critical analysis in peer-review–is to call attention to the claims made in the screenshot above. Given the cited source material, I ask you, dear reader, to:

Remember that Piltdown Superman doesn’t know what a soul is either. Since he can’t distinguish that or “spirit” from mere consciousness, and neither do his sources, then I will distinguish them for him. Every religion commonly accepted as such by both its critics and its adherents is a faith-based belief-system holding the notion that some essence of self, (perhaps including consciousness or even memories) will somehow survive the death of the physical body and continue on in some supernatural, mystical form. This is consistent. Even the Pharisees believed this. So I posit that the “soul’ or “spirit” is that immortal essence of self. Because if we’re only talking about consciousness, then fine; we already have physical, chemical means of confirming that without any supernatural or religious implications whatsoever.

If the problem is MY inability to reason, or perhaps a result of the demons he imagines me worshiping, (why would I even believe in demons?) then any of you should be able to show what I have overlooked. However, what I predict instead is that no matter how many people read this article, not one of you will be able to satisfy either of the two simple challenges here, meaning that material science still has the best explanation of consciousness, there is no scientific evidence of supernatural spirits, and Piltdown Superman is the one with the cognitive dysfunction rather than me.