Recently I was contacted by one Yanir Tearosh representing the Israeli Atheist Association.  I was surprised to hear there was such a thing.  More amazing than that, they’re actually holding an atheist convention in Tel Aviv.  I wouldn’t have thought that possible.  But it is apparently a thing, and his organization has asked me and GrapplingIgnorance to promote it.  Here is Yanir’s pitch:

Israel is a democracy – a good one! but…

More than 10% of Israelis are orthodox Jews and another 20% are Arabs (most of them are believers).

the rest of the population are Jewish believers of all kinds.

There is a big confusion about the topic of  – is Judaism a religion or a nationality.

This confusion make many Israelis vote for pro – religious laws

(just like the claim in the us that it was founded on christian values – only with less pork).

In Israel we have more than 1 education system.

most of the first graders this year will attend the religious schools and not the secular.

until 2050 the orthodox Jews will be a majority.

They already have a lot of power in the government.

In the past few years we saw a rise of religious oppression – one examples is the approval of buses with *gender separation* in the religious neighborhoods.

put aside the fact that this is anti democratic, there are many secular people on the bus rout.

Also secular Jews here have to have a religious marriage ceremony – have to!

If you don’t want to do it  – you have to travel abroad and get married there.

Secular Jews have to join the army – orthodox Jews don’t. All they have to do is study the holy books and they get a free pass from service.

(we fight for them – they actually pray for us)

And…They get paid from that state for doing so – unlike a physics student that have to pay to study.

And that is not the biggest problem.

The movement name religious nationalists are even bigger than the orthodox sector.

They are less “weird” looking and bled in very well – but – they are the hardcore sector – militant.

You probably heard about the settlers – most of them are religious nationalists.

They want to rebuild “ Judea” from the sea to the river

(that includes sini desert, Jordan, and the Palestinian territories).

Off course not all of them are like that – but the ones in power are.

In the next Knesset (the Israeli house of representative) we will probably have about 25% openly religious people  – now its about 10% (from 120 seats).

Israel is a democracy – a good one! but…will it stay like that for long?

Thanks again for helping

This event occurs next week on January 10th.  I found out about it while on a holiday vacation with the family.   So I didn’t have a lot of time to make a decent ad, not if I need to give at least a week’s notice before-hand.  So here it is: 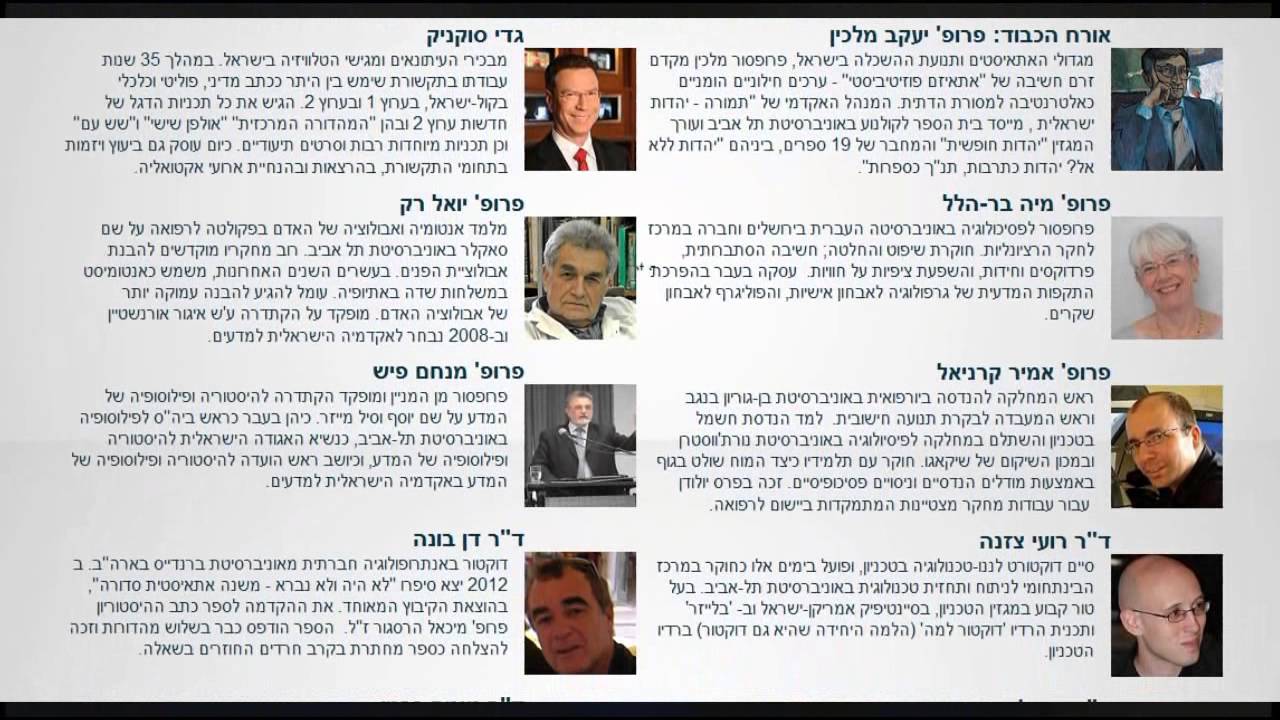 and these are their four main speakers:

One of the world leaders in the field of human evolution. Member of the Anatomic labs in the Tel Aviv University’s Medicine department. Head of the Israeli cathedral for the study of aging. Member of several paleontological expedition to Africa. Expert in the field of human digestion and the evolution of the humanoid skull. Head of the Anatomic studies department in the faculty, and is one of the top ten best speakers in Tel Aviv University.

An expert in the field of logic, paradox and rational thought. Member of the Hebrew University’s institute for rationality. Offered a solution to the Newcomb’s paradox, and disapproved the theories that promoted the bible numerical code. Works on disapproving common myths, such as graphology.

Author of over twenty books, Malkin is an art critic, researcher, atheist and historian. Established the Tel Aviv University cinematography faculty and Tmora, the Israeli institute for the teaching of secular rabbi’s. Wrote several of the leading articles, magazines and books concerning the topic of humanism and Judaism and a trend setter in secular Israeli thoughts.

The Israeli Atheist Association neglected to provide me with a plane ticket to Tel Aviv, (probably because I can’t tell Hebrew from Yiddish) so someone who knows the language will hopefully report back to let me know what I missed.