I am not exactly sure what the key thing is that unites people attending The Amazing Meeting. I know that I enjoy hanging out with other skeptically inclined people, and more often than not they self-identify as atheists. At the same time, I am aware that TAM also welcomes Christian skeptics and skeptics of different stripes. Although I haven’t met a Christian skeptic at the two events I have attended, it could happen! Even though not all of the differently striped skeptics could join together with mucho gusto in unison with Penn Jillette’s No God Band for a rousing rendition of “F-you you’re an atheist!” at his after party, that is okay.

Anyways as I was waiting for the elevator at the hotel that hosted TAM,  I got unwittingly roped into explaining what TAM is about to the good folks who were there for the Las Vegas BMX Nationals. We waited in the lobby together for an elevator with a few TAM goers, who had decided to express some Scots pride by wearing kilts. As we got in the elevator, I chose to ignore the quizzical expressions the family of BMX enthusiasts had on their faces.  (If you are an atheist BMXer bear with me). It would be impossible to explain TAM and kilted TAM goers in a short elevator ride. However, curiosity got the best of one of them, who noticed I was also wearing a TAM badge.

“What is TAM?” a woman asked as she read my badge.

Flummoxed , I stammered, “It’s a skeptics meeting….” They still looked puzzled. “…for people who are skeptical about things like alternative medicine.”

Another of their party helpfully added, “You know… like herbs.” They exited the elevator not really impressed by the other event at the hotel.

The incident in the elevator reminded me of why a lot of people go to these things to be with like-minded people, because in their communities they may feel marginalized and alone. If it wasn’t impossible, if you had adequate time and a platform to explain to most Americans the importance of skeptically evaluating claims and basing beliefs on evidence could you do it? Why should they be skeptical? How does it impact their everyday lives in a way they should care about it?

“I think the trouble with being a critical thinker or an atheist, or a humanist is that you’re right. And it’s quite hard being right in the face of people who are wrong without sounding like a fuckwit. People go “do you think the vast majority of the world is wrong”, well yes, I don’t know how to say that nicely, but yes.”

To make matters a bit more complicated the skeptical community is divided about what or if we should be communicating. There is the atheist vs. humanist or skeptic label debate that the atheist label is too exclusive. Not just that when we gather together under the skeptic-label big tent, disparate voices wrestle over what’s on our agenda or whether there should be one.

During the Penn & Teller Q&A, a man asked Penn Jillette about how we could spread skepticism. I kinda felt sorry for him as Jillette answered that you can’t do that without being a pig. The answer may have been harsher than he intended because he further explained that that is what evangelicals do winning converts and such. (paraphrasing) Also, he added that he admires the people that put together your friendly neighborhood meet ups, and he is a member of his local group. He probably enjoys hobnobbing with the little people, because as a lot of people know he is physically bigger in real life. He made Aron look small. 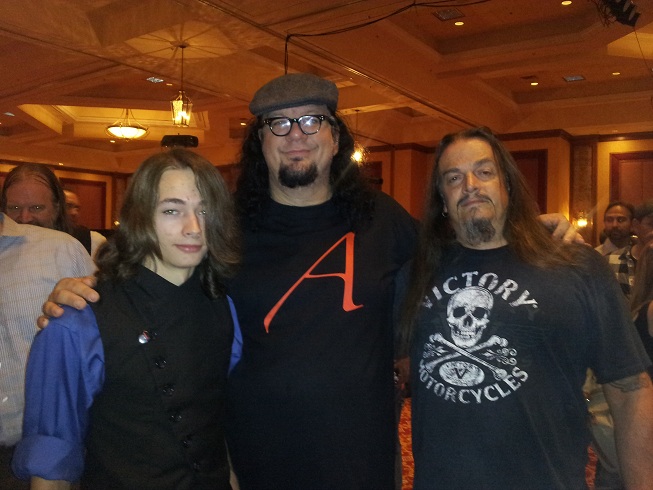 Back on topic, Mr. Jillette remarked a few times on how unpopular his libertarian views are in the skeptical community. For libertarians the word lawlessness may have a different context than it does for a lot of us. Libertarianism is one of a few can of worms that you don’t want to open in the community. Good, decent people draw battle lines. He skirted the issue at most of his appearances.

Even though I am deeply offended by some of the arguments of libertarianism, I wonder why are there topics in a community of freethinkers that can’t be debated rationally? I would love to see Mr. Jillette debate a skilled liberal skeptic on this topic. A simple battle of ideas against ideas. No name calling or help from the peanut gallery of supporters. Just your best arguments against his best arguments all business and nothing personal. A debate when after it is done they could shake each others’ hand, and tell each other what a good job they did defending their ideas.

We’ve seen similar derision at the Humanist convention in New Orleans.  All of the celebrated speakers described their positions as unambiguously atheist, though none of them used that label as it was not welcome.  The woman who called Cenk Uygur to the stage introduced him as having “evolved from atheist to humanist”.  This was just one of several unnecessary jabs.  Some of the conventioneers told representatives from American Atheists that atheists were “hurting the movement”.

Despite our internal differences, the freethinking community must be doing a good job convincing more people that they are wrong about their beliefs because our numbers are growing. Popular atheist writers and the internet have been a wonderful tool for reaching people and convincing them to examine their beliefs. However, are the people these methods are reaching naturally more resilient to the social pressure to conform? Are we a movement of outsiders, and proudly so (including proud kilts-men)? Or can we reach just about anybody from any walk of life (including BMX fans) without being pigs?

What they or I meant by ‘absolute truth’