I’ve heard from a number of Hillary supporters who want to “make history” by electing the first female president. The ones I’ve heard from don’t seem to know Clinton’s policies or her history; they say they’re voting for her simply because she is a woman. Some go even further and say that anyone who doesn’t vote for her is a misogynist, though none have been stupid enough to say that to me yet. This is why I wish that Elizabeth Warren had run instead of Bernie, or with Bernie as her VP (since they share the same policies). Then these Hillary supporters would have to evaluate their choices. Then I think they’d quickly smell what I do. Given this vastly better option, Warren could have walked away with both the nomination and the election with no contest. But Warren didn’t run. So anyone who wants to vote for a better woman could vote for Dr Jill Stein, who received her party’s nomination before Hillary still hasn’t. However Stein’s chances are vanishingly …well, not there. And the establishment would squash any serious progress. That’s what they do.

If Hillary is the nominee, then all my arguments against Trump supporters are so much weaker. If she runs instead of Bernie, then even if she wins, our tax system won’t be fixed, put back as it was before Reagan. Marijuana won’t be legalized despite all the studies and trial results in various states, because she is reportedly more interested in private prison profits than legalizing or forgiving anything. Significant environmental issues won’t be addressed, not even “incrementally”: no matter how urgent it is. Instead we’ll have world-wide fracking as we refuse clean energy technology now available and continue our poisonous addiction to oil, which is why we’ll have more war. Because she’ll profit from it, as she always has. Because this is no longer a Democratic Republic; this is oligarchy and the plutocrats have positioned their puppet. So that she’ll get more weapons deals with foreign forces who should be disarmed and disassociated, We’ll have more war and risk worse war if she gets her no-fly zone trying to intimidate Russia. Because she is an unethical conniving criminally corrupt corporate shill and a dangerous dishonest war hawk who repeatedly demonstrates obviously poor judgment and is usually on the wrong side of history.

She does or supports only what her sponsors endorse. That’s why she flipped her position on gay marriage. Otherwise, the only time she got something right, she took the bribe to do it wrong anyway: this according to Elizabeth Warren. Fortunately, the trend among Dems is to be progressive. That’s why she switched her position on that too, pretending to be whatever part she’s paid to play.

So we won’t get either the higher education or the health care system that poorer countries can afford and that more advanced countries already have, because that is in the interests of the common people, but not the super-rich who really run this country. Instead, insurance companies and lending institutions will still be involved because she only works for corporate interests.

And sure, even though she’s been embroiled in more scandals than anyone else, throughout her entire career, she still hasn’t been indicted or convicted of anything. And I doubt she ever will be, no matter what she is guilty of: because she’s so well connected. In every state where she has won, there have been allegations of every type of voter suppression, and I’ve seen how some of these accusations have been verified by court hearings and further evidence in multiple states. But the rulings are that no formal investigation will take place until after the election –when it is too late. I doubt anything will come of it then either. I think it will just be forgotten. Our high level politicians seem impervious to penalty. Being indicted now won’t bar Hillary from running either. Texas Governor, Rick Perry was already under indictment when he ran against her anyway. His Lieutenant Governor David Dewhurst committed voter fraud by falsifying public records before 180,000 online witnesses that he didn’t know were watching, and he was never reprimanded for it. So Hillary will not be held accountable for anything.

There was no justifiable reason for supporting Hillary over Bernie. If she is the nominee, then how do I defend a vote against Trump? Both candidates are comparably contemptible proven liars with dangerous foreign policy and no regard for the environment. At least Hillary has experience, though she does not have the type of record she should.

I used to like Hillary OK once upon a time. But that changed once I heard how she can be bought and switch position according to sponsorship. The more I learn about her, the less I like her. I think she is the worst candidate the Democrats have produced in my lifetime.

At the same time, Trump is actually better than several of the competing Republicans. Isn’t it amazing that the entire Republican party couldn’t produce a single sane or reasonable candidate out of the whole clown car of theocratic ideologues? That’s how a morally reprobate shyster beat them all out: that was literally the best they could do!

With that said, I still have to agree with Sanders: that even on her worst day, even as bad as she is, Hillary is still better than Trump on his best day. She has no ethics, but he has nothing at all. He’s a failure at everything he does including bankruptcy. How can a billionaire owe hundreds of millions of dollars to foreign banks? His staggering incompetence is matched only by his narcissism. But the only good thing you can say about him is that he isn’t Hillary. 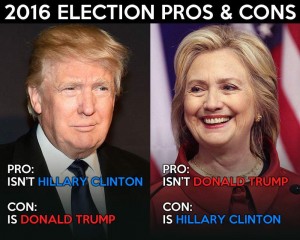 These two may be the most UNpopular candidates in American history, with him even worse than her because of his racist, sexist, sensationalist irresponsible and immature rhetoric. In fact he’s so unpopular, that some people have the false impression that the opposition he’d receive in Congress, coupled with his ineptitude might render him less dangerous than Hillary. Except that Congress has a Republican majority, and they will vote as a bloc. Even if they don’t like the guy, (and they don’t) they’ve already rallied to support him. He will face little or no opposition in Congress, except from the Democratic minority. The Dems are divided, as are independents. Polls indicate that 90% of Bernie’s hard core supporters will not vote for Hillary. So nominating Hillary might very well mean electing Trump.

Meanwhile Trump has already announced how he will bring to ruin several things that we need to have improved. I don’t know why people vote against their own interests. But they do. If we were to do the opposite of what he wants, then we’d actually solve many of the problems that our “war on drugs” has actually created. So if your health care matters to you, (I HAVE to have it) or if you’re worried about the choice of supreme court justices or women’s reproductive rights, then you’ll either have to vote for her, or figure out how we can still nominate the right man for that job.

I’m Banned from the Ark Park

How is secular humanist governance better than theocracy?