I’m having breakfast in a hotel that plays only Frank Sinatra. Every song, Sinatra.

It’s not that I hate Sinatra, but his whole genre. When I was a kid, the old fogies listened to “the rat pack”, Sinatra, Sammy, Bing and Dino. Awful stuff. Amore’ was a stupid fucking song! It was either easy-listening lounge lizards or worse. Whenever I stayed with my grandparents they played Lawrence Welk. That was agonizing -especially because I wasn’t allowed to say anything about it. It was such stale “safe” saccharine sap that it caused me to rebel. That goody two-shoes crap was worse than Leave It To Beaver set to music. I hated Leave It To Beaver too. All that unrealistically tame non-threatening white bread conservative, not at all like real life illusion irritated me even as a little boy.

At my dad’s house it was country music -with Merle Haggard moaning about the good ol’ days of good ol’ boy supremacy, and how awful hippies are, and how you’re supposed to submit to repressive conformity. That music and the culture that produced it implied that you’re supposed to parrot the same thoughtless negativity as everyone else. So of course as a child, I was forced into crew-cuts and cowboy clothes and not expected to like anything different than my dad and his clan did. It was like living in Mayberry, if you’ve ever seen the Andy Griffith show. 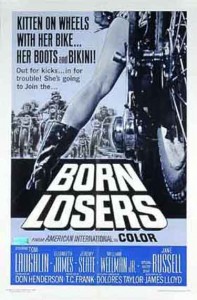 hiring a babysitter, my mom would drop me off at a Disney double feature. Then she’d pick me up a couple hours late, after I had already seen the next movies that were not meant for kids. This was around 1971. So I saw Billy Jack and the Hells Angels and the Woodstock festival and several other things I wasn’t supposed to see. I saw plenty of free love counter culture adventure busting norms on the social frontier, and somehow something clicked. Maybe it was because we were living in Los Angeles then. I don’t know. But I was NOT going to be a short-haired clean cut “nice young man”. I listened to Black Sabbath and looked the part.  My first albums were live recordings of Steppenwolf and Iron Butterfly. I stole them from my mom. Every other album she had was light weight fluff, Herb Albert, Englebert Humperdink, women with bouffant hairdos and fuckin’ Sinatra. The two albums I stole were the only good ones she ever had.

For years, I had to argue about the length of my hair every single day with every adult in my life, and that’s no exaggeration. My step dad and I finally went to blows over it. That was gratifying! I got sick of people telling me to “clean myself up” as if I wasn’t cleaner than them already. When the movie version of ‘Hair’ came out in 1979, I could really relate to Berger, the lead hippy. I was so like that once upon a time. Especially that scene where he argues with his dad over getting a hair cut and a job.

I mean it seems like everybody I meet nowadays, men and women alike, have tattoos, a good attitude and an active life-style. You’re all more interesting than practically anyone was in my day. I grew up in an environment where you were only expected to utter approved opinions imposed by social conservatives and any deviation from that was punished relentlessly. A lot of the people I knew then bought into that and were assimilated by it, but I just couldn’t do it. That’s kinda how I turned out the way I am.

To Billy in Fullerton