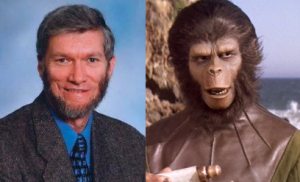 Ken Ham of AnswersInGenesis ministries may look like Cornelius from the original planet of the ape series, but he is the kingpin of dogmatic pseudoscience propaganda, who’s organization is at the center of science denial for every other peddler of religiously-motivated snake-oil around the world. Next week, he’ll be opening another affront to reality in the form of his Noah’s Ark park, a violation of 1st amendment rights allowing not only allowing state-funded religious extremism but also religious discrimination against its employees: all for the sake of creating the illusion that a boat of cards can look realistic after $170,000,000.00 worth of trained engineers using modern electric and hydraulic equipment to duplicate a fable about a 600 year-old man and three untrained laborers using only stone age tools. So to celebrate everything Ham and his ilk have done to retard or reverse every sort of progress in this and many other countries, we’re going to protest the opening of his wholly unrealistic Genocide and Incest park. I will be joining with my associates, David Silverman president of American Atheists, David Smalley of Dogma Debate, Dan Barker from the Freedom From Religion Foundation, journalist Dan Arel and several other activists from skeptical secular organizations. We’ll all meet up with the Tri-State Freetinkers in Williamstown Kentucky. Further details of this meetup can be found on their facebook page. 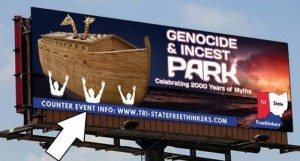 My schedule for this year so far