Hey Hollywood, would it kill ya to have a science adviser when doing science fiction?

Let me preface the rest of my rant with the admission that I have always been a Godzilla fan.  I wasn’t really a fan of kaiju, (giant Japanese monsters) only Godzilla himself.  He was my hero as a boy, and even now his roar has been my only ring tone any of the cell phones I have ever had.  By the time I hit puberty, I had already lost count of how many times I had seen Godzilla vs the Sea Monster, Son of Godzilla, Monster Zero, and the one that started it all, (for me) the 1956 American-dub called ‘Godzilla, King of the Monsters’.  Literally dozens of movies have been made about this terrible lizard, and all of them have been ridiculous for different reasons.

The original 1954 Japanese film, Gojira was iconic, and only made a couple mistakes of any significance.  (1)They killed him in the end, and we saw his body turned to skeleton. Not the best way to begin 60 years worth of sequels.  (2) Godzilla was depicted as a dinosaur, and was associated with living trilobites.  Even if there was some sort of ‘realm that time forgot’ out in the Pacific somewhere, Trilobites were already extinct before the first dinosaurs, and Godzilla was clearly no dinosaur. 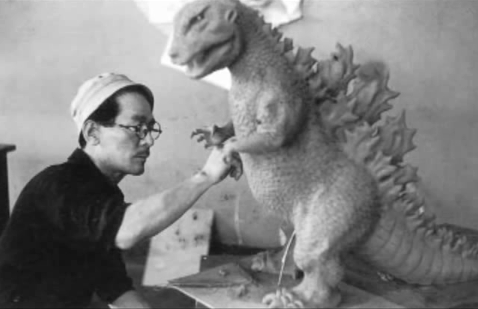 The conceptual artists reportedly referenced illustrations of dinosaurs, but that’s not what they rendered.  All bi-pedal dinosaurs [Therapods] were digigrade, walking on their toes, like birds, and usually only three or four digits.  Godzilla was plantigrade and pentadactyle, (having five digits and walking on the whole foot) just like lizards.  It even looks like a lizard, apart from the fact that no reptile has an actual nose or external ears.  In a sense, what Toho pictures created was actually an oriental dragon.  These tend to mix reptilian and mammalian traits.

Amusingly in 1954, Toho made a giant lizard and called it a dinosaur.  In 1998, Tristar re-designed Godzilla as a dinosaur, but called it a lizard.  Of course that wasn’t the only thing Tristar did wrong.  They tried to ruin the monster completely.  They took away the only thing that worked in decades of sequels, the look of the monster itself.  Then they took away everything that made Godzilla appealing to Kaiju fans, then they tied it down and shot it.  Such disrespect.  If you’re going to make a movie that already has a fan-base, and they are the ones who will decide whether your film will pay off, respect those fans and the story they’re paying to see.

The new Godzilla from Legend pictures tried to do that.  They said their version was the biggest ever, at 355 feet tall.  But that depends on the English dubbing.  Godzilla King of the Monsters said that he was “over 400 feet-tall”.  But they used the same footage as Gojira, in which the monster was only 50 meters, or 164 feet.

Of course, there is another scene in King of the Monsters where Raymond Burr says, “Here in Tokyo… time has been turned back two million years”.  The last of the non-avian dinosaurs were apparently wiped out 65 million years ago. Two million years ago, there were already people and elephants (of a sort) but nothing like the Mesozoic dinosaurs.

Now there is actually one thing Tristar got right.  Out of all the Godzilla movies, Tristar is the ONLY one to get this right.  Their radiated iguana has a much more plausible back story than either Toho’s original dinosaur, being ‘awakened and radiated”, or the new one from Legend Pictures, which I’ll talk about in a moment.

Hollywood, weren’t you embarrassed when you made Avatar, and you made up ‘unobtanium’ as if you could just add a new element to add to the periodic table, and have it be safe to hold in a naked hand?  At least G’14 hired biologists to help design their monster. One thing they got right, that no one else ever did, was that any animal of enormous size tends to have really tiny eyes.

I think that the best science fiction is where the story is fiction but the science is real, or at least as real as possible. If you’re going to write a good sci-fi, and you want me to believe the one wholly implausible idea that your story is about, then every other aspect of the film should be as seemingly reasonable as it possibly can be. That’s what Jurassic Park tried to do. If I am to believe that an impossibly huge reptilian monster is destroying the city, then the back story of it’s origin ought to sound realistic enough to counter-balance that. That’s what the first Godzilla movie tried to do. After that, filmmakers adopted the opposite strategy; so that everything else in the subsequent sequels had so many outrageous absurdities, each so insanely stupid, that the monster in the middle was the most reasonable element by comparison. Of course you’ve got a 30 story-tall sapient dino-lizard with a phaser-generator in it’s mouth. Why not? How else is it going to fight the equally enormous bipedal beetle with drill-bit arms? Especially now that it’s being mind-controlled by those aliens from another Japan in outer space. Someone needs to get those 3-inch tall identical twins to sing their song that wakes up the giant space bug. I don’t know what a 100-meter moth can do, but we need all the help we can get now that our toxic waste has come alive too!

I like Godzilla as much as the next guy. No, I like Godzilla more than the next guy!  Since I was a little kid, I watched all those absurd rubber-suit movies thinking how cool it would be if we remade Gojira as a big budget block-buster. They failed to do that in 1985, when they brought back Raymond Burr. They failed to do that in 1998, with Tristar’s GINO (Godzilla In Name Only) and I’m sorry to say that they failed again with the latest attempt.

The first problem was that it should have been a horror movie. It is actually possible to do that.  As a survivor of both earthquakes and tornados, I can explain exactly what that would be like. I once got a phone call saying that radar is tracking a twister headed straight for my house.  I looked out the front door, but couldn’t see the end of my driveway because of the torrential rain.  I knew there was a 400 foot-tall monster coming at me through the darkness, but I couldn’t see or hear it. All I could hear were were the warning sirens and distant screaming, both barely audible through the driving rain.  Having no defense or escape in that situation, I know exactly how frightening Godzilla could have been.

There is also the issue that the new Godzilla is fighting other kaiju. What makes this monster unique is that he’s far bigger than the biggest thing there ever was. So it doesn’t make sense to suddenly have a whole bunch of other things that are just as freakishly huge as he is. The ‘mutos’ he had to fight were beyond absurd just on their own, and they are part of the biggest problem this movie has.

The male muto starts out as a parasite on a fossil, even though it’s far bigger than anything that is actually known in the fossil record. Then it burrows underground (again grossly implausible for an animal that size) as a caterpillar which then has to build a nest in a nuclear reactor where it takes ten years of radiation absorption to gestate. Then it has to fly half way around the world to find a female. Within the female’s eggs, we can see spawn identical to the adults. No parasitic stage, no caterpillar stage, no gestation period. No one paid any attention to the biology of these ridiculous things that don’t match anything from this biosphere. Essentially it’s like Godzilla vs the alien monster from Cloverfield, because that’s very much what these things look like.

Godzilla 2014 missed the mark primarily because it is not an origins story.  Gojira was a monster of our own making.  Similarly Gino was supposed to impose nature’s response to our meddling.  But G2014 pre-existed genetic modifications and nuclear testing.  We have no responsibility for him, nor the mutos either. They come from a time that never was, millions of years ago, “when the world was much more radioactive than it is today”.  The story implies that mutos ‘eat radiation’. In the film, they can track it through every kind of protective shielding, and they eat nuclear devices like fruit -metallic peal and all. I guess millions of years ago, nuclear missiles grew on trees, and kaiju were common even though they’re absent from the fossil record -with only one top-secret exception.  As an advocate of science education with a deep interest in paleontology, and as someone who would rather see humans held accountable for what they do to their environment, this film was very disappointing.  As an atheist, it was even worse.

The star of the film not only has impossible dimensions and an inexplicable power, he is also immortal.  He’s been alive forever, and spends all his time sleeping. He awakens only he senses submarines or the arrival of other kaiju, because he has a mission to protect humanity.  G2014 put the ‘god’ in Godzilla. The director called him a god, and some of the characters in the movie describe him as a god too.  So he’s not a lizard, not a dinosaur, but one of the Lovecraftian great old ones like Cthulhu.  In a video I made years ago, I too joked about Godzilla being a god. But it was still somewhat disappointing to see him depicted that way.

However, just to end this on a high note. The new Godzilla movie is better than most of it’s predecessors. One of the worst things about G’98 was that Gino didn’t have a breath-weapon like every other Godzilla movie did. I took my boys to see G’14 in IMAX 3D as soon as it came out, and we didn’t yet know if this movie would have what the last one didn’t.  That scene -when the battle was on, and we finally saw those dorsal spikes light up, glowing blue; we knew what that meant, we knew what was coming, and my boys were already cheering. That was the money shot!

31 thoughts on “Weighing in on Godzilla”

Being a closeted atheist can still cost you –so I am coming out.

Are You a REAL Christian?