Earlier this month, I drove to Kentucky to protest the Noah’s Ark Park. Trying to reason with believers there was an exercise in futility. 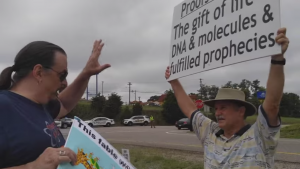 Now, Eric Hovind and his crew are deliberately trying not to understand; or at least they’re to appear as if they don’t understand, or that they understand something else. I don’t think Eric buys his own bullshit though: I really don’t. However the rest of the people I talked to have never seen or heard of a clue. Sadly, although I can simplify explanations pretty well, I’m still tripped up by how misinformed or completely un-informed these people are.

For example, the guy who thought he check-mated me. There were so many opportunities I missed in talking with him. He’s using the same words as me, but he doesn’t know what they mean. He pluralized DNA in such a way that it seems that he thinks DNAs are uniquely individual schematic designs without any perceptible relationship to that of other organisms. I don’t know. I should have caught that clue and asked about it. That guy wasn’t going to learn anything by telling him anything. He is one example where I should have asked him to define or paraphrase everything. Then I could take him through a step-by-step lesson plan. But fuck, who has that much time or patience?

Tony Ramsek of the Ark Encounter staff was a bit different. He had to unlearn all the nonsense he thought he knew before we could go anywhere, and he wasn’t willing to do that. I missed opportunities with him too, because he said that he accepts speciation, but that he rejects macroevolution. I had him and still neglected to explain to him that they are the same thing; that he has to say that he accepts macroevolution or he has to back track and change his position on whether he accepts speciation. Why didn’t I close that trap when I had the chance? I didn’t even chase him down on the spontaneous generation vs abiogenesis thing. But he had obviously already shut off his brain by that point.

With Ramsek, as with most of these others, one of the things I wish I had said is “we have a universe, we have matter, we have life, and we have two different notions of how it all began. Science says that happened naturally. Religion says it happened magically. Science has a very complicated explanation and evidence to back that up where religion doesn’t have either one. But let’s pretend for a moment that science never had any explanation or evidence at all. What would your evidence be? Because you can’t just assume that it’s God just because you don’t know what else it could be. You can’t just assume ridiculous things because you don’t know the real answer. Religious believers still have to produce evidence of their own to indicate why they think the explanation is that a god did it.

I have seen plenty of shifting of the burden of proof, and logical fallacies such as that the evidence or proof of God is that if you don’t understand it then it must be magic. But despite how you’ve been mislead, misinformed and conditioned to not think about this, your irrational assumptions and fallacious incredulity are not evidence. Arguments are not evidence, even when they’re not fallacious. Evidence is a body of facts indicating a particular conclusion, and no one has ever provided evidence for any god.

George Bernard Shaw famously said, “Beware of false knowledge; it is more dangerous than ignorance.” Clearly he had met these people too.

A Letter to a Certain Christian