On a Saturday evening on the 16th of November, predominantly Southern Baptist television viewers in Atlanta Georgia got to see a pair of Buddhists trying to direct an argument with me juxtaposed against a Biblical literalist from Liberty University. That was great fun! 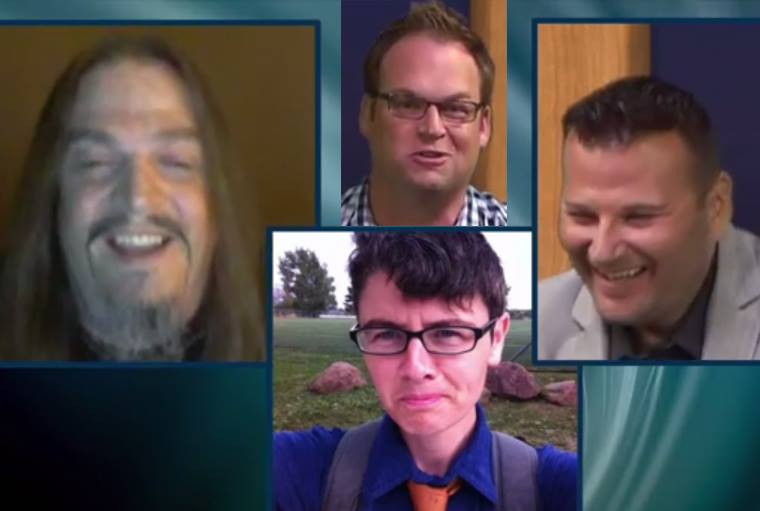 The host, Mark Gura described himself as a spiritual non-theist, and he invited Dr. Ann Gleig, a Liverpudlian Professor of Indian religions, to defend his position in this triad of perspectives. Seated next to our host was Pastor Joey Jernigan representing fundamentalist Christian Young-Earth Creationism.  It was called the ‘Blind Faith Virus Vaccine Show’, so I’m not sure how many Southern-Fried Christians would have watched it, but I’d bet there were probably more Christians in that audience than Buddhists or Hindus, statistically speaking.

I don’t know how he happened across either of these other guests, nor why he decided to throw me into the mix.  I’m rarely on TV because -let’s face it, I have a face for radio.  But I was glad to be on, and the show turned out really well I think.  If you weren’t watching TV in Atlanta that weekend, you can still see the show on YouTube.  The host has even graciously allowed me to upload it on my channel for promotional purposes.

That was only the first of two episodes.  Part II, (which was recorded in October) will air on Comcast Channel 24 in Atlanta, and on Comcast channel 25 for North Fulton County, on Sunday, December 15th at 7:00pm.  The producers have assured me that Part II will be much better.  In fact, they said it was it ‘explosive’.

So please help me promote the live television viewing of the second half of this show by passing these links around your social media.  I’m really happy with the idea of Evangelicals in Georgia turning the channel toward their Reverend Creflo Dollar, and happening across me instead.  [cue villainous snickering]

I’m testifying at the State Capitol

Not suitable for all advertisers?