It figures, don’t it?  When I saw this photo (taken of me during an argument at the Reason Rally) I thought, “this is the worst picture that has ever been taken of me.”  So of course that’s the one that gets shown on CNN. 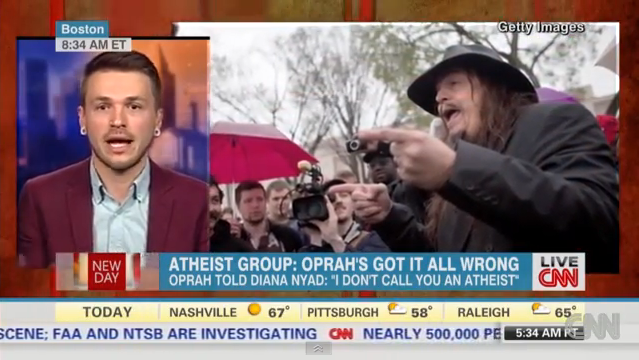 It’s not like I was really on CNN.  If I was, I would have explained what a god is, so that believing Neilsons would have a clear understanding of what atheists don’t believe in, and why.  But someone on their staff saw fit to put my picture there, as if I had anything to do with Oprah.  Well boys, at least now I can say that I’ve sorta been on CNN, …kinda.

Today Matt Dillahunty tweeted that Oprah Winfrey should have an atheist show, which is a great idea that ought to happen.  He suggested a number of appropriate guests, but that list does not include me.  They want pretty-boys like David Silverman, Zack Kopplin, and Jerry DeWitt, all friends of mine.  They’ve already been in People magazine, Faux News, CNN, Bill Maher, and so on.  They’ll never put me on TV.  But the news channels will post the worst pic they can find of me when they want atheists to look counter-culture.  That’s why I’m on the Dogma Debate; because I have the face for radio.

Some of my old friends from back in the day think I’m famous now, but I’m really not.  A lot of my new friends are on Wikipedia, but not me.  Well, there is one reference to me when you look up Learning Hebrew: A Gothsploitation Movie.  In the ‘review’ section, it mentions how I referred to that film as “the weird kind of strange”.  It’s not a movie I’m actually in, just one I promoted.  The only cinematic film I’m in is The Zombie Christ, and it’s so bad, even the cast doesn’t want to see it.  This is amusing, but I am probably the most famous person in that movie, but I was only an extra, and they didn’t even put my name on IMDB.  They just gave me tee-shirt promoting the film, along with a copy of the movie …recorded on a used VHS tape.

I’m happy that Lawrence Krauss lists me as one of his friends, and Dawkins usually seems pleased to see me too.  They’re in a documentary film together, The Unbelievers which is currently being released in Hollywood.  I’m in maybe seven different documentaries, most of which were released direct to YouTube.  The only one that ever made it to TV was only aired in Canada, and I wasn’t even interviewed in that one; I just appear in the background.  Oh well.

If I had more fame, I’d probably have more money too, and I can just imagine how many problems that might cause in my life!  So it’s probably just as well that I’m not really famous. Still, I can’t believe I fought zombies for Jesus, and all I got was this lousy tee-shirt.

Debatable Inquiry in a Church

Ken Ham refused to debate me