This election has by far the most uniquely interesting primary that I have ever seen. I’ve been absolutely fascinated by it since the start and can’t read enough about it. Because the general election appears to be decided by who gets the nomination. It’s hard to imagine actually electing any of the feces-flinging monkeys in the Republican clown car, and it doesn’t really matter which of them gets the nom; this election is all on the Democrats. As I see it, it’s Hillary vs Bernie, and that decides the rest.

I used to like Hillary OK many years ago, even though a lot of other people really hated her; back then it was mostly Republicans. I inquired of several of them as to their reasons why, and I never got an answer that was justified. All of their excuses were irrational and many were out-and-out lies. For example, one Republican broadcaster announced that he hated Hillary because he hates gays, and he said that she had openly declared herself a lesbian at some huge women’s caucus: -as if this were a matter of public record. I had to wonder why it was that such a story was completely unknown by any other person in the world besides him, especially since he wasn’t even there.

So I would have sided with her back then, especially since her husband was actually seen as helping our economy, and was a fairly popular president. I thought he was a good president back then, even though I didn’t like him as a person -at all. My reasons for that have to do with well-documented lies and also manipulation, like the way he exploited and manipulated Rosa Parks for example. Secret Service forcibly pulled her to her feet at a rally after she visibly refused to stand. No one even seemed to notice that besides me. But I was outraged.

I began to change my mind about Hillary when I saw how she would change her position if paid to do it. This is exactly what Elizabeth Warren said about Hillary a few years ago, when she said that Hillary could be bought. Now I agree with what Obama said about Hillary during the 2012 election, that “she will say anything and do nothing”. The more I pay attention, the more obvious that is. She appears to be a corporate-sponsored puppet who will not take a position on any controversial topic until she is either sponsored to take that position or sees that she will be sponsored because it has become so popular. That’s why she held the Republican position on gay marriage for so long, and why she still holds that position regarding the decriminalization of marijuana -despite all the data which is exclusively to the contrary. I suspect, as many others do also, that she will do whatever she is paid to do.

That, as I see it, is the biggest problem the American political system has at the moment; that we need to get money out of politics, disrupt the dynasties, and stop corporations and a billionaire oligarchy from deciding what will or won’t pass. This was supposed to be a Constitutional Democratic Republic for and by “we the people”. The reason Hillary cannot solve that problem because she IS the problem personified. 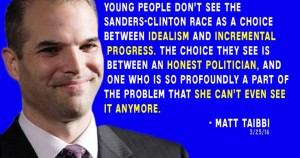 If this election were down to Hillary vs whatever Repugnacant, then I’d be voting for the lesser evil, like I usually have do. But in this election, I can actually vote FOR someone, someone I like and want, who deserves it, and is someone we really need. Bernie is the only candidate in either party with a net positive approval rating. He’s obviously not in it for the money either. Hillary made more money speaking to corporate execs last year alone than Bernie has in his life savings. His life-long consistent record shows that he’s in it for all the right reasons, and that he is the best candidate I have ever seen who ever actually ran.

I wish that Elizabeth Warren had run, especially with Bernie as her VP, because they share the same policies. Then all those people who said they’re voting for Hillary just because she’s a woman would have had to evaluate that choice, given a vastly better option. I’m always surprised at people who I think should know what’s up, but who support Hillary anyway. Their explanations sound just as irrational or demonstrably wrong as the reasons why Republicans hated her years ago. They say “She gets things done”, but she doesn’t. Few people can cite anything she’s accomplished, and what she tries to ‘get done’ are often things we don’t want done, or that we need UN-done.

Hillary supporters say that Bernie is unelectable, but he’s been beating her against all odds. She has the old people vote because they vote by mail based on what they see on the news, and mainstream news media is not talking about Bernie. That’s not just in the United States either. I’m hearing that from Australia and throughout Europe as well. When they do mention Bernie, (as they HAVE to this week) they say he’s the outsider without any hope of winning. But he IS our hope of winning, and he certainly does have that chance. Everywhere he has campaigned he has done well -despite disparaging or disinterested media.

Bernie polls against all the Republicans better than Hillary does. Too many people hate her now, even in her own party. If she is nominated, too many disinterested Democrats will stay home. Nominating Hillary means electing Trump. Whereas Bernie beats everyone. Every single person I have talked to on my travels to any country in the last 14 months have unanimously said that we need Bernie. I haven’t heard of any Hillary supporters outside the US, and those I have heard from seem naive, uninformed, or mislead. That’s why Bernie won the foreign vote by such a landslide; because Americans outside the US know things that the stay-at-homes don’t.

Today on Facebook, someone actually criticized me for “showing my political idealism”, as if that was a bad thing, as if that were something we should not do. Sorry, but as long as I have an informed opinion that I have already shown is the more defensibly accurate AND morally noble, then that is what I’m going to keep right on doing.

I understand that electing Bernie will not solve the problem. But even if he can’t actually do the things he wants to do. electing him shows that we want those things, and that we will move our government in that direction incrementally: where Hillary’s promise of incremental progress can’t do that -and is designed not to.  I also understand that it doesn’t come down to one man; that this requires a grass-roots systemic change in the senate and everywhere else as well.  But electing Bernie is a signal, our statement that we know the system is broken, and that we’re not OK with that: we’re going to fix it.

dropping out of the Dogma Debate