I suspect atheists experience less warm, fuzzy moments than theists.  A lot of us are philosophically opposed to something like bowing our heads with family, and friends in prayer before we break bread.  A skeptical mind can be quite the buzz-kill to believer fellowship activities.  In real life, I sense that I make religious acquaintances, friends, and family uncomfortable when I won’t at least bow my head when they are praying thanking an invisible deity for food.

However as a former Christian, I remember the campfire moments -voices raised together asking god to Kumbaya. In retrospect, the plaintive plea asking god to come by here seems naive, because frankly he never really did.  Can you imagine being the sole, skeptical person at that campfire trying to disguise the fact in order to be accepted that you didn’t believe any god was present?

I sometimes wonder what it must have been like to be Thomas Jefferson.  One of the few people of his time that didn’t believe that their god wasn’t telling them to drive out or even kill the heathen or heretic of a different sect. It must have been maddening.  His disappointment with the Puritan persecution of Quakers influenced his view of secular government.

So where does an atheist go to satisfy human social needs for the feeling of acceptance and fellowship?  Where do you go to feel the love? Speaking as an introvert, I find large groups draining to my underdeveloped social skills.  However here in the South, religion is ever present in most social interactions; it can make even the most confirmed loner feel isolated.  It feels good to sometimes go somewhere where at least you don’t have to watch what you say.

Recently, my husband and I went to the Dallas Gay Pride parade to march with The Metroplex Atheists.  The Metroplex Atheists received cheers from the happy crowd all along the route.  Some of the regular members were telling me how different it was from the Independence Day parade.  They said that they have been booed and told that if they thought it was hot today wait until they went to Hell.  One even told me that parents cover their children’s eyes as the Metroplex Atheists go by. 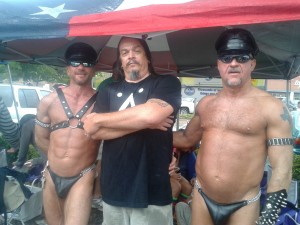 A church float followed ours that was apparently welcoming to homosexuals.  I couldn’t help but wonder why gay people would go to even a gay-friendly church given that most of the discrimination against LGBTs is religiously motivated. I remember when we protested Gov. Rick Perry’s Prayer Rally.  LGBT rights groups were there to protest the American Family Association’s religiously motivated homophobia.  They didn’t want to ally with atheists.

LGBT Christians puzzle me.  In the worst cases, it must be something akin to Battered Woman’s syndrome. It is an abusive relationship where you are convinced that the abuse is deserved because there is something wrong with you.  You are sick and need god to be better.  In extreme cases, it can be likened to Stockholm syndrome where you adopt their mentality in order to survive.  “Former” gay pastors are an example that comes to mind.

However, looking on the LGBT friendly church float, I think for most gay theists it must be the Christian fellowship and community they are accustomed to.  Again, I have fond memories from my childhood of the warm fellowships around the fire with other Christians.  It can be hard to leave that security blanket behind.

What does atheism have to offer in exchange? Many atheists insist that being an atheist should mean a nonbelief in god/s and nothing else. That is cold comfort to someone leaving behind the only community they have ever known.   A few others insist that there are limited resources in our community and those should be spent on more worthy causes like the fight against theocracy and furthering science education.  Those are inarguably worthy causes.

However, I believe the more the merrier.  I don’t believe it exhausts our resources in the slightest to discuss expanding our community to be more welcoming to women, racial minorities, and LGBT people.  Not in an exploitive way like theists have done.  For every warm Christian memory I have, I have many others of Christian authorities corrupted by absolute power over people threatened with Hell not to question their authority.

I’ll never forget my young friend, who was molested at a church house cleaning fundraiser. Soon after, the 40 year old man was made youth minister by my pastor, who excused his behavior by blaming the victim.  To this day, she is an active church member, who would likely shun me for being an atheist.

If we ever expect that kind of exploitive power of the church to wane; we are going to need to be more welcoming to its victims.  How do you build a community from scratch without a traditional culture?  That is a more worthy starting point that groups in my area like the Metroplex Atheists and Fellowship of Freethought are already starting on.  If you’re in the south, you can also commune with other community-deprived atheists at the Texas Freethought Convention.  If you are a ‘dictionary atheist’, who believes that atheists should only concern themselves with nonbelief; you can at least get out of the way.

33 thoughts on “On Atheist Warm Fuzzies”