After I finished the Foundational Falsehoods of Creationism video series, I considered doing another related series on the Noachian flood. I wanted to do separate episodes showing how meteorology disproves the flood, (by which I mean physics, really.) how geology disproves the flood, and how archaeology, anthropology zoology, and even mythology disprove the flood. I opted not to do that series years ago, because I didn’t think it necessary anymore, that enough people understood by now that the global flood never really happened that I wouldn’t have to point that out anymore. But now that Ken Ham has built his Noah’s ark park and we still have senators who say that sea levels can’t be rising because God said he wouldn’t flood the world again, well I guess we should have that series after all. It would be a time-consuming project. So we made it a goal on my Patreon, that if we can keep our listing above $2,250 per video, I’ll produce that series. We met that goal today. So I want to thank our patrons, and let them know that I’ll get started on the new series. 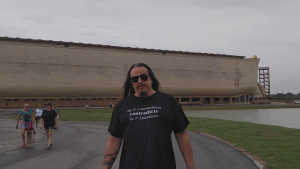 We have one more goal still to reach. If we can get over $2,500, I’ll do a different series on the Systematic Classification of Life, where I highlight different segments of our evolution “from molecules to man” to show how we know that we are what we are and how we got that way. That series will also be time consuming to fit in my schedule because it is research intensive.  I want to explain the step-by-step descent of man through all our ancestral clades and what we know about how each step came about. This will be a more educational version of a discussion I once had with a creationist on ChristianForums.com. That conversation convinced her to accept evolution, teach science, and then marry me. 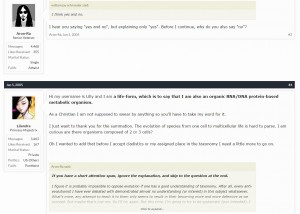 She’s really embarrassed by this post nowadays. So don’t tell I shared this with any of you.

If you like what I do, please consider becoming a patron.
https://www.patreon.com/aronra

If you are up for a protest of Ken Ham; he will be in Texas promoting Creationism to homeschoolers