As I explained in a previous post, the Texas State Board of Education recently considered including language in their science standards that would have allowed teachers to cite anti-science apologetics whenever they didn’t want to teach real science. So instead of teaching evolution, teachers could promote their own personal belief in creationism instead. The Republican party also has a doctrinal obligation to deny environmental science, including climate change: whether to excuse responsibility for anything we do, (which seems to be the goal of Christianity) or to defend our corrupt financial addiction to the fossil fuel industry. This language in the standards was designed to allow teachers to become preachers, sharing their uneducated opinions instead of the truth, and to spread misinformation about abiogenesis, human cloning, or any other knowledge that religiously-biased teachers don’t like and refuse to understand. This is the consequence of living in a world of alternative facts.

My wife and I testified before the Board against this. Surprisingly, despite a number of vocal creationists on the board, the majority of the SBoE voted to exclude that language and just teach the facts of science without regard for the teacher’s willfully ignorant personal opinions, nor those of whatever parent group wants to undermine our students’ education. However, much of the government wants to censor the lessons in order to control what the next generation believes. They want education to be all about misinformation, indoctrination. They can’t allow students to learn about evolution, because then they’d understand it, and they wouldn’t be such easily malleable minions for the religious right. Religion is a means of manipulation of the masses. So when the SBoE voted against propaganda politicizing the classroom, right-wing religious Republican Christian conservatives had to find some other way to keep censoring, evading, and misrepresenting the facts.

Enter conservative Christian Republican Representative Valoree Swanson from Spring, Texas. She tried to override the board by presenting the exact language the SBoE had just voted against as House Bill 1485, originally submitted in February. If you can’t get injustice through the board, push it through Congress. There will never be a time when creationists admit that they’re morally or factually wrong; they’re relentless. Since they can never win with science, they use legislation instead. This is why it is so important to vote, and to vote them out.

So Lilandra and I went to Austin again, this time to testify before the House Education Committee at the State Capital. Testimony was supposed to begin at 8:00am, and we were there on time. But they had a couple dozen other bills to go through first. They recessed at 10:00am to go to the floor on another five pages of bills in session, and that took several hours. 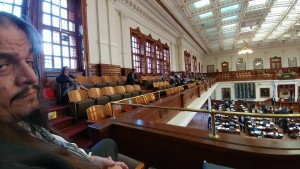 It’s amazing to me that we have hundreds of people in this building just making up new laws all the time, and that so many of them are unnecessary or insane.  It’s also funny to me that since I am running for Texas State Senate, I am effectively applying for a job in here, but being in the Capital building feels a bit like being in a mad house.

We listened to a number of bills. One was to lower the cost of getting a concealed weapons license. Because if even the mentally disabled can have guns now, then everybody has to have a gun on them wherever they go: so we have to make it cheaper for people to do that. Another bill tried to increase the population in jail. The most religious areas also tend to have the highest percentage of their population in prison, and Texas is notorious for that. 5% of Texans are under the criminal justice control, owing in part to privatized prisons. So the bill we heard hoped to send suspended children to go to school in jail. There were lots of other bills trying to give money to any sort of alternative school, but nothing ever to improve public schools–because public schools are bound by Constitutional secularism, and we can’t have secular policies in Republican Trumpistan. 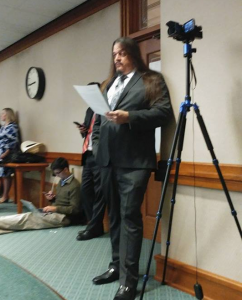 We were confidently informed that the Education Committee would be recessed for a couple of hours; then that they were scheduled to reconvene by 2:00pm, but they didn’t come back until 6:45pm. The bill we came to counter was pushed back toward the end, so that we didn’t get to testify until around 9:30 at night. We were there fourteen hours. By then some of other witnesses had already left or couldn’t make it anymore. So again it seemed to fall largely on Lilandra and I, as our allies trained in this issue couldn’t be there. Our opponents were still there though, a lawyer from a “faith, family and freedom” organization, a climate science denier, and one of the creationists from the State Board of Education–in addition to the bill’s author and her allies on the Committee, who think that scientific theories are just blind speculation. We were again wholly outnumbered, but I think we did alright.  There were at least a couple people on the committee who seemed to thoughtful and reasonable.

There is so much to say about the testimonies of each of the creationists against us that I will have to write another blog post to explain what was going on with them. For right now, see for yourself, and share your opinions and outrage of this conduct in the comments below.