I saw an article in Inquisitor today,wherein someone read through 126 historic documents from 1st century Israel, written by people who should have known about Jesus, yet had never heard of him. This includes Josephus, whose only mention of Jesus is now known to have been a forgery or redaction inserted later by someone else.

Josephus also wrote extensively about Herod the Great,  but never mentioned the Slaughter of the Innocents, the story of Jesus’ childhood which mirrors the tale of Moses’ childhood. This is because they’re both just stories following popular themes. This is only part of the evidence that Jesus never existed, or at least among the reasons to suspect that Jesus never existed, which explains why I am now a mythicist.

It’s not just that I don’t believe that Jesus is a god, nor the son of God, nor a prophet of God. There is no such thing as gods, just like there’s no such thing as ghosts, and magic doesn’t really work either. Russell Brand criticized “atheistic tyranny” for denying the supernatural, but there is no supernatural to deny. The whole concept of the supernatural is evidently a product of human imagination, deceptive pattern recognition, confirmation bias, and a host of other perceptual, logical, and intellectual failures to discern fact from phantasm.

Where do you go when you die? Where does your data go when the computer says, “Hard disk failure: Operating system not found”? It’s the same thing. You don’t ‘go’ anywhere; you just don’t exist anymore. You don’t have a soul. Even the Bible says you are a soul. You are the behaviors and knowledge generated by your brain, and you cannot be separated from that.

If we are to think scientifically, then we don’t have to prove a negative. We don’t have to prove something doesn’t exist to be justified in not believing that it does. We can be unconvinced of something, and thus not believe it, yet still allow for any possibility—when there is one. But in this case, there isn’t one. Remember that miracles share essentially the same definition as magic, being inexplicable by science because it defies the laws of logic as well as physics, meaning they’re physically impossible by definition.

I used to think that Jesus was a real person who lived in Judea somewhere between 4 BCE and 40 CE. I know a lot of Christians who say that Jesus “divided time” by being born in the year zero, but there was no year zero. The gospels erroneously attributed to Matthew and Luke say Jesus was born during the reign of Herod the Great, who died in 4 BCE. However Luke also says he was born shortly after the Census of Quirinius, which was conducted ten years later in 6 CE. But neither account allows that he could have been born between those dates.

Someone else posted that Bart Ehrman had “well established that Jesus existed.” The person who said that also admitted that he already believed that before he read the book, and that’s probably why he maintained his original impression. But Ehrman did NOT confirm that. He essentially argued that “everyone knows Jesus existed,” but that’s not true. No one knows that, because no one can show HOW they know that. People raised in predominately Christian countries are just told from birth that Jesus lived at that time, and most of us never thought to question that. That’s the only reason why most historians still don’t, unless they’re Christian. Then they believe it on faith as well. But the fact is that there is no historic evidence that Jesus ever existed, and at least some historians now admit that. 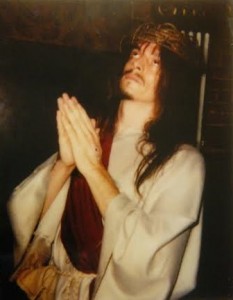 When I read the gospels, I don’t see a wise and benevolent sage imparting truth. I see a religious extremist and faith-healer, who is just as much of a scam artist as any of the exorcists still practicing today. Remember that Jesus taught his disciples how to do faith healing too, just like tele-evangelists still do. Jesus didn’t believe in washing your hands because he didn’t know about pathogens. He believed in demons instead. And he cursed a fig tree because he didn’t know they were out-of-season. Likewise he didn’t know that the farmers of his day already knew about other seeds that were smaller than mustard seeds. My best evidence was Jesus’ complaint that the people who knew him since childhood wouldn’t buy any of his bullshit. So the only indications I had to believe in a historic Jesus were the very points that implied that he could not be a god nor have any real connection to God. So there are only two possibilities: Jesus was either an ignorant 1st century charlatan and cult leader heavily exaggerated like Robin Hood, or he’s a completely imaginary legendary figure like Hercules.

Remember how Jesus said that he came not to bring peace but a sword; that he would divide husbands from their wives and children from their parents all on behalf of beliefs based on faith? Remember also that faith, (an unreasonable assertion of complete conviction which is not based on reason and is defended against all reason) —is the most dishonest position it is possible to have. Any belief which requires faith should be rejected for that reason.

Charles Manson, the homicidal leader of the Manson family had the same sort of thing going on. According to prosecutor, Vincent Bugliosi, they had a hard time finding witnesses, because people were afraid Manson’s powers. They thought he was capable of remote viewing, telepathy and a number of other psionics. At that time, witnesses who believed in such things had to be dismissed as mentally incompetent. Now they can be leading candidates in the GOP. One witness said that one of Manson’s miracles was to make their bus fly like a plane. This was in the 1960s, in the modern age of enlightenment. If Manson lived 2,000 years ago, we might have churches worshiping him now. So it was easy for me to imagine a completely fraudulent scamming huckster named Jesus.

What changed my mind? While on the Dogma Debate podcast, and on my own podcast, the Ra-Men, I have interviewed Frank Zindler, D.M. Murdock, David Fitzgerald, Robert Price, and Richard Carrier, all of whom are scriptural experts with some expertise in ancient history, ancient languages and comparative religion. I have learned from all of them that the very reasons I thought Jesus was real were themselves parables. The story of the fig tree for example and even the location where it happened was rife with symbolism and not to be taken as literally true. For further explanation of that, I have recorded videos of Richard Carrier speaking on the mythical Jesus and explaining how the religion of Christianity developed without Jesus. It seems the whole of Christianity might have been invented by one or two people, out of a new interpretation of one of the Jewish angels and that this story was then quickly enhanced to give the fable historical credence.

Robert Price has an interesting theory that Josephus might be the same person as Joseph of Arimathea. Josephus mentioned three real people with strong similarities to Jesus: Jesus ben Ananias, Jesus brother of James son of Damneus, and a third character on a cross. Josephus saw three people he knew being crucified, and he used his clout with the Romans to have them cut down. Two of them died; one lived.  Although none of these characters could be taken as the kernel of truth to that tale, they might have lent to the motivation to historicize that tale; to claim accounts that it had actually happened here in the real world and very recently. Remember how the story has Jesus telling his disciples that none of them would even taste of death before he returned? That’s why they embellished this story so soon. They really really wanted to believe it. That’s how faith works. That’s why they’re still waiting for him now —even though he’s a couple thousand years late. Now I the reason he hasn’t returned yet is that he was never here in the first place.

Now I won’t say that I know Jesus never existed to the same degree that I know Moses never existed, and I’m absolutely certain that Noah never existed. All of them, even Adam & Eve, were evidently adapted from other heroes of earlier legends from neighboring regions. We can prove that pretty conclusively in every case except for Jesus. But even then I do have really good reasons not to believe that Jesus was ever really real.

Edit: One thing I forgot to mention before is that having a history of deeds that were adapted from multiple sources, or pertaining to multiple heroes -means not having one person anyone can identify as the source of those stories. We’ve got two different birth dates in different centuries for a kid who grew up in multiple towns in two different countries. How much of this might have been gleaned from Jesus of Damneus who’s brother was James? How much of this came from some other actual figure? And how do we discern it from all the other sources, some of which weren’t based on any actual living person at all? Most mythicists argue simply that there was no single person whom any number of time-travellers would recognize and agree that’s the one they’re looking for.

“Be well assured …that I am established in the knowledge of and faith in the Scriptures by those counterfeits which he who is called the devil is said to have performed among the Greeks; just as some were wrought by the Magi in Egypt, and others by the false prophets in Elijah’s days. For when they tell that Bacchus, son of Jupiter, was begotten by [Jupiter’s] intercourse with Semele, and that he was the discoverer of the vine; and when they relate, that being torn in pieces, and having died, he rose again, and ascended to heaven; and when they introduce wine into his mysteries, do I not perceive that [the devil] has imitated the prophecy announced by the patriarch Jacob, and recorded by Moses? And when they tell that Hercules was strong, and travelled over all the world, and was begotten by Jove of Alcmene, and ascended to heaven when he died, do I not perceive that the Scripture which speaks of Christ, “strong as a giant to run his race,” has been in like manner imitated? And when he [the devil] brings forward Aesculapius as the raiser of the dead and healer of all diseases, may I not say that in this matter likewise he has imitated the prophecies about Christ? . . . And when I hear… that Perseus was begotten of a virgin, I understand that the deceiving serpent counterfeited also this.”
–Justin Martyr, 2nd century apologist

Where is the story of Jesus being as strong as a giant to run his course all over the world? This is obviously one of the many accounts of Jesus which apparently played into the origin and development of Christianity, but which was subsequently censored and eliminated. So we really have no idea how many borrowed legends Christianity was really based on. But all of the stories we still have were apparently adapted from tales originally told about someone else.

How to disprove Noah’s Flood