1By those [winds] that scatter far and wide, 2and those that are heavily laden, 3that speed freely, 4that distribute [rain] as ordained! 5What you [people] are promised is true: 6the Judgement will come––7by the sky with its pathways, 8you differ in what you say–– 9those who turn away from it are [truly] deceived.

This surah doesn’t begin with letters the say so many others do. This makes me suspect that this one was written by a different person. Although we are supposed to believe that all these surahs were written by an illiterate man taking dictation from angel, despite all the absurdity, redundancy and contradictions, or abrogations.

Translator Abdel Haleem also has a number of footnotes for these first few verses, including that the “scattering”, in this case, is a benevolent one, unlike the normal references, and that the “heavily laden” means “laden with rain”. What he does not clarify is what “those” refer to. NobleQuran puts that in parentheses:

1By (the winds) that scatter dust. 2And (the clouds) that bear heavy weight of water; 3And (the ships) that float with ease and gentleness; 4And those (angels) who distribute (provisions, rain, and other blessings) by (Allah’s) Command.

It seems the book is missing each of these parenthetical nouns, which had to be inferred according to context.

10Perish the liars, 11those steeped in error and unaware! 12They ask, ‘When is this Judgement Day coming?’ 13On a Day when they will be punished by the Fire, 14‘Taste the punishment! This is what you wished to hasten.’

So skeptics, rightly, ask “when will that happen?” seeking an expiration date for this alleged prophesy. And the answer they get is “It’ll happen when it happens”. So no answer at all.

15The righteous will be in Gardens with [flowing] springs. 16They will receive their Lord’s gifts because of the good they did before:

Remember that “good” only means “believe”. Because acts of evil will not necessarily exclude believers from Heaven. But if you don’t believe, then you can’t in no matter how good a person you were.

17sleeping only little at night, 18praying at dawn for God’s forgiveness, 19giving a rightful share of their wealth to the beggar and the deprived.

Have you noticed that traditionally, Christianity and Islam both advocate social welfare wealth distribution, but the modern variants both object to that anywhere outside of a church or mosque?

20On earth there are signs for those with sure faith––21and in yourselves too, do you not see?––22in the sky is your sustenance and all that you are promised.

These verses encourage the question-begging fallacy, that if you already believe that God did or does everything, then everything you see will somehow accord with that assumption without question.

23By the Lord of the heavens and earth! All this is as real as your speaking.

My speaking can be tested, validated and confirmed. Not so any of these empty assertions.

24[Muhammad], have you heard the story of the honoured guests of Abraham? 25They went in to see him and said, ‘Peace.’ ‘Peace,’ he said, [adding to himself] ‘These people are strangers.’ 26He turned quickly to his household, brought out a fat calf, 27and placed it before them. ‘Will you not eat?’ he said, 28beginning to be afraid of them, but they said, ‘Do not be afraid.’ They gave him good news of a son who would be gifted with knowledge. 29His wife then entered with a loud cry, struck her face, and said, ‘A barren old woman?’ 30but they said, ‘It will be so. This is what your Lord said, and He is the Wise, the All Knowing.’ 31Abraham said, ‘What is your errand, messengers?’ 32They said, ‘We are sent to a people lost in sin, 33to bring down rocks of clay, 34marked by your Lord for those who exceed all bounds.’ 35We brought out such believers as were there– 36We found only one household devoted to God– 37and left the town to be a sign for those who fear the painful punishment.

This is one of the Qur’an’s many condensed retellings of Bible stories, this one being where people who are assumed to be angels prophesy of the birth of Isaac, supposedly to a 100 year-old father and a 90 year-old mom.

38There is another sign in Moses: We sent him to Pharaoh with clear authority. 39Pharaoh turned away with his supporters, saying, ‘This is a sorcerer, or maybe a madman,’ 40so We seized him and his forces and threw them into the sea: he was to blame.

So according to this story, Moses’ “authority” wasn’t very clear at all. It wasn’t even apparent until after he failed and fled.

41There is another sign in the Ad: We sent the life-destroying wind against them 42and it reduced everything it came up against to shreds.

The people of Ad dwelt in Southern Arabia, which then included Yemen, an arid desert. The great wind is likely to have been a violent dust storm.

43And also in the Thamud: it was said to them, ‘Make the most of your lives for a while,’ 44but they rebelled against their Lord’s command, so the blast took them. They looked on helplessly: 45they could not even remain standing, let alone defend themselves.

As I understand it, the people of Thamud are the surviving descendants of the people of Ad, except that their now-abandoned homes still exist, carved into the rock. I am unsure what happened to these people. IslamicStudiesInfo says “Different words have been used for this torment at different places in the Quran. Somewhere it has been called rajafah (a frightful and shocking calamity), somewhere saihah (a crashing and thundering disaster), somewhere taghiyah (a most severe affliction) and here it has been described as saiqah (a calamity that strikes like a thunderbolt). Probably this torment was like an earthquake which was also accompanied by a terrible noise.”

46Before that We destroyed the people of Noah. They were a truly sinful people!

47We built the heavens with Our power and made them vast,

…in the dome of a firmament which doesn’t exist.

48We spread out the earth– how well We smoothed it out!–

Once again, the Qur’an depicts the earth, not as a globe, but as a flat map spread out as if on a round table. Which is the same way it was depicted across Asia in ancient times.

49and We created pairs of all things so that you [people] might take note.

This might be referring to sexual pairs, which are not consistent across biology. But it might mean more than that. IslamicStudiesInfo only confused me further with their explanation: “That is, everything in the world has been created on the principle of the pairs. The whole system of the universe is functioning on the principle that certain things are complementary and matching to certain others, and their combination brings into being countless new forms and combinations. Nothing here is so unique as may have no match, for the fact is that a thing becomes productive only after it has combined with its matching partner.”

Here God himself is complaining that he keeps sending “messengers”, self-appointed prophets, but the people never believe them. So they never believe in him the way he wants them to. Rather than learn from this repeated mistake, and try something more efficient and direct, God blames the people for not believing his prophets and sends storms, volcanos and earthquakes to destroy the unbelievers. All because God can’t figure how to communicate effectively.

56I created jinn and mankind only to worship Me:

That sounds masturbatory. We are God’s inflatable followers.

57I want no provision from them, nor do I want them to feed Me–

That feeling is mutual.

58God is the Provider, the Lord of Power, the Ever Mighty. 59The evildoers, like their predecessors, will have a share of punishment– they need not ask Me to hasten it– 60and woe betide those who deny the truth on the Day they have been promised.

You tell me not to hasten it? I dare you to do it.

1Have you heard tell a [Prophet] about the Overwhelming Event? 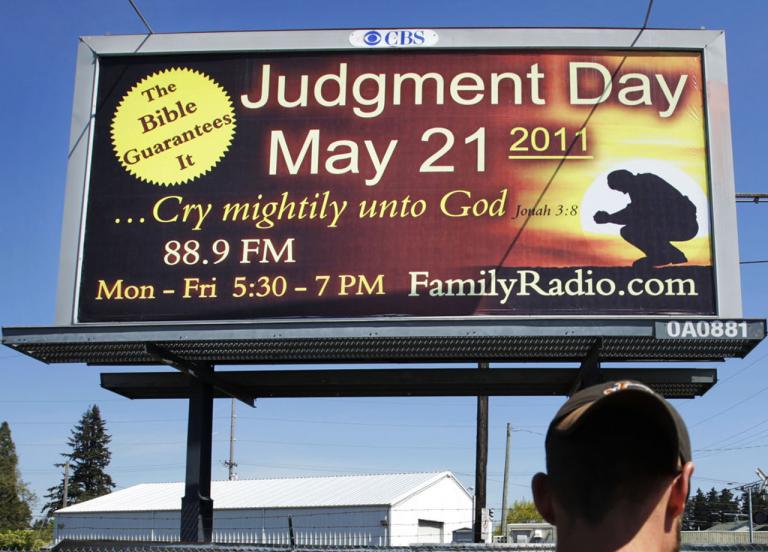 Remember when the Evangelical radio broadcaster, Harold Camping said that a global earthquake would rip the world in half on May 21st, 2011? One of his followers, Robert Fitzpatrick blew his life savings of $140,000 on a thousand advertisements on bus shelters, subway cars and so on, (like this billboard pictured above) warning people about the end of the world, which was supposed to happen at precisely 6:00pm Eastern time. 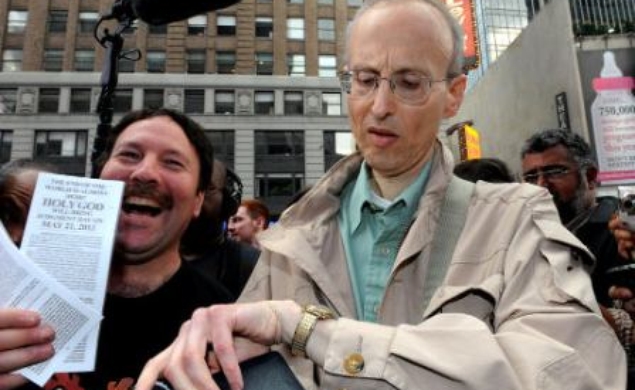 Here is an image of Fitzpatrick checking his watch and realizing that the time has come—and gone. The world is still here and he is still here; only he is now completely broke and elderly. Harold Camping had already published at least four other failed end-times prophesies even before that, three of them in 1994, then another in 2005. So Fitzpatrick should have known better by now. But because faith means never admitting when you’re wrong, he proclaimed that he has no regrets. He instead began preparing for when the world would REALLY end. That was supposed to be six months later, which was almost a decade ago now. Yet at least three or four more end-times prophesies were already prophesied and failed since then.

2On that Day, there will be downcast faces, 3toiling and weary, 4as they enter the blazing Fire 5and are forced to drink from a boiling spring, 6with no food for them except bitter dry thorns 7that neither nourish nor satisfy hunger.

Of course no one would hunger or need nourishment since everyone would be immortal anyway.

8On that Day there will also be faces radiant with bliss, 9well pleased with their labour, 10in a lofty garden, 11where they will hear no idle talk,

About how all their family and friends are being mercilessly, brutally and senselessly tortured right now, just because they didn’t believe the lies of a raving mad man who couldn’t make any sense.

12with a flowing spring, 13raised couches, 14goblets placed before them, 15cushions set in rows, 16and carpets spread.

It’s not as nice as all that. There is no alcohol allowed, and speech is restricted. No one is allowed to speak idly or disparagingly. So there can be no debate or discussion of any value. Nothing ever changes in Heaven, so there’s never any news. There’s not even any weather worth talking about—ever.

17Do the disbelievers not see how rain clouds are formed,

We do. Are we the only ones who do? Why don’t you?

18how the heavens are lifted,

There are no “heavens”. There is no firmament.

19how the mountains are raised high, 20how the earth is spread out?

The earth is not “spread out”. It is not a map. The Earth is a spinning ball, on which the atmosphere clings because of gravity, and mountains are pushed up by tectonic plate movements, not God “casting” mountains as paperweights onto the map of the earth.

21So [Prophet] warn them: your only task is to give warning, 22you are not there to control them.

But control them he did.

23As for those who turn away and disbelieve, God will inflict the greatest torment upon them. It is to Us they will return, 24and then it is for Us to call them to account.

And of course this verse is contradicted by Surah 9:5, which says the very opposite.