The classification of turtles is one of the oldest and most contentious debates in taxonomy. What are they? Meaning, what is their phylogeny? Not “how did they evolve?” (we’ve figured that out now, I think) but “what did they evolve from?”

Several years ago, I gave a presentation making some predictions about how future fossils could confirm whether turtles are just another lineage of Diapsids (like lizards and crocodiles and every other actual reptile alive today) or whether they would turn out to be the sole surviving lineage of Anapsids, a diverse group of “para-reptiles” from way back in the Permian period.

Scutosaurus, (above left) is typically representative of pareiasaurs, one of a few subsets of para-reptiles that went extinct approximately 252 million years ago. While some might think that it and Sauroctonus, (the saber-toothed predator facing it) were both reptiles, neither of them actually were.

At that time, all these things that look like reptiles to the untrained eye basically fell into one of three categories determined by holes [fenestra] in either side of the skull in the [temporal] area behind the eyes. Anapsids have no temporal fenestra. Diapsids (the true reptiles) have two. 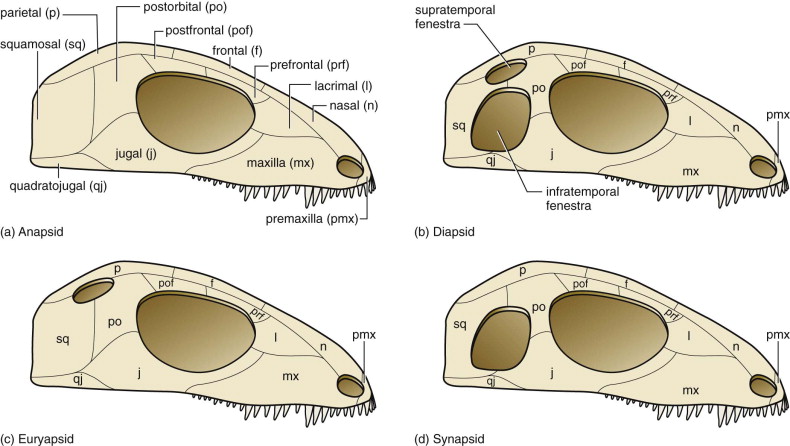 These fenestra may be caused by differential growth rates in the various bones; such that some species grow to have holes in certain parts of their skull. These may close up again in some later generation, but can still tell where it was or would have been. In equally rare instances, a new hole might erupt in some descendant lineages too. For example, dinosaurs are a subset of Diapsid reptiles, but they added a new pair of fenestra, over the nasal cavity in front of their eyes. Then birds (themselves a subset of dinosaurs) closed both of the old Diapsid fenestrae, but kept the new dinosaur one.

Euryapsids were once thought to be a fourth group, but they were later determined to be a line of Diapsids in which the lower fenestra had closed up again. So Euryapsids are still part of the Diapsid group, just like birds are. Though it may seem strange to think of birds as reptiles.

Synapsids (like the saber-toothed Sauroctonus in the image at top) have only one fenestra, just like typical mammals still do. Humans do too. Though that hole has closed up in our skulls, it still shows an outline; here indicated by the outline of the temporalis muscle. 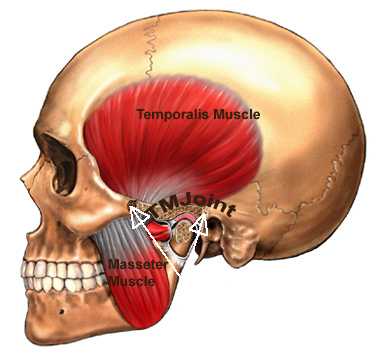 I had hoped that turtles would be the last surviving anapsids. But a year or two after I gave my presentation, I was disappointed to learn that additional evidence indicated that turtles were more likely something like Euryapsids; a Diapsid subset in which both fenestra have closed, rather than being a “true” Anapsid. So I made another video talking about all of this and the changing classification of turtles according to fossil evidence. In that video, I complained that since we don’t have DNA for any of those ancient Anapsids, then we have nothing to compare turtles to, except for crocodilians and lizards that are still alive. I said that fossil evidence was all we could use to determine their still-uncertain placement, but I also had to admit that those fossils meant that I was wrong, that turtles were “just” reptiles after all, and that consequently the Anapsid line is entirely extinct.

Then I found out about another study of Turtle origins: Insights from phylogenetic retrofitting and molecular scaffolds, which corrected that again; this time combining fossil morphology with a level of genetic analysis beyond what I thought they could do. This study opens with a summary statement that “under certain analytic conditions” the study of fossil proto-turtles “raises the possibility that turtles could simultaneously be most closely-related to a taxon traditionally considered a parareptile (Eunotosaurus) and still have archosaurs [Diapsas their closest extant sister group”.  So turtles could be [what we thought were] Anapsids, just not those anapsids. OK, if you’ll watch my video on Synapsidae, you’ll see that I already knew that. But then they went further.

“the assumption that turtles were anapsid‐grade reptiles was strongly challenged by studies placing them with sauropterygians, a clade of marine diapsids that includes placodonts, plesiosaurs”.

I had turtles in the right place in the Phylogeny Explorer Project, but I hadn’t linked them with the lineage leading to plesiosaurs. And they’re saying that the reason some placodonts (below) look so much like turtles is that they’re likely so closely-related, that they might even be stem turtles themselves.

Maybe. Though I think that incites another argument over the nature and mechanics of convergence.

While not conclusive—in the sense that the study will never be complete—these corrections are still evidently increasingly accurate. Even if you find out that you didn’t have everything right, it doesn’t necessarily mean you’ve you got it all wrong. Science changes constantly, because it has to if we are to keep learning.  But every change should be an improvement—like playing a game of Twenty Questions. And that’s the sort of progress I think we’re seeing here.