I looked up my book on Amazon.co.UK, and noticed these “sponsored links”. 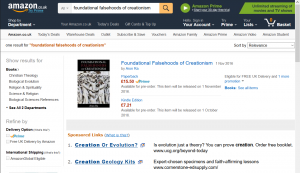 Do you see this shit? How should I respond to those links?

“Is evolution just a theory?”

That’s the 15th foundational falsehood of creationism. If you think evolution is “just” a theory, then you don’t know what a theory is.

“You can prove creation.”

If you follow that link, you’ll see a website claiming that the Bible has been forbidden in classrooms, which is false! Instead, students have freedom of religion protected by restricting teachers from indoctrinating sequestered students. If your school-aged children are Catholic, Jewish, Baptists, or Jehova’s Witnesses, then you don’t want their teacher converting them to the Restored Church of God, right? Nobody wants that, and Madalyn Murray O’Hair saw to it that you don’t have to worry about that: so your children will still be limited to the faith you imposed on them, and not the teachers’ religion instead. You’re welcome. Now shut the fuck up.

That site also claims that criticism of evolution is “ruthlessly suppressed”. Wrong again. It is not “suppressed” at all. You cannot suppress what does not even exist. Willful ignorance, magical mysticism and an unreasonable belief in dogmatic fables do not constitute criticism of science. Creationists are unable to produce a valid criticism of evolution, nor anything that supports their own idea as an alternative either. All they can do is lie to people, taking advantage of the under-educated to mislead and deceive other people’s kids in an attempt to deny reality.

The Institute for Creation Research is a grotesquely dishonest anti-science propaganda mill who’s primary purpose is to mislead and deceive.

An understanding of the truth of reality doesn’t require an affirmation of faith; that’s only for make-believe, when you want to pretend something is true even when you already know that it evidently isn’t. 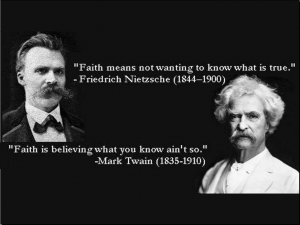 If you click the link for creation geology kits, it will take you to a Young-Earth religious extremist science denial site offering home school and religious extremist Christian school materials designed to fuck up your child’s ability to think critically or understand reality. Instead they’ll be misinformed, mislead and mentally-conditioned to believe in evil spirits, incantations, and other such magical woo woo with absolutely no truth to any of it. These sites are complete bullshit and everyone duped by them is a victim who’s foolishness is being exploited by deliberately dishonest charlatans. They may as well be selling snake-oil.

Victory for Science in Texas!