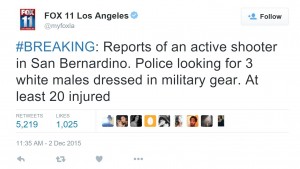 Although there have been Islamist terrorists, who appear white such as the Chechnyan Tsarnaev Boston Marathon Bombers, here is more preliminary evidence this is domestic terrorism:

During a news briefing, San Bernadino Police Chief Jarrod Burguan said information about the party was “preliminary” and declined to comment on a motive for the shooting. “We have no information at this point to indicate that this is terrorist related, in the traditional sense that people may be thinking,” Burguan said. “Obviously, at a minimum, we have a domestic terrorist-type situation that occurred here.”

Of course all information is preliminary at this point. What is known so far is:

President Barack Obama was briefed on the attack and reiterated calls for stronger gun laws. “…We should come together in a bipartisan basis at every level of government to make these (shootings) rare as opposed to normal.” Read more at Reutershttp://www.reuters.com/article/2015/12/02/us-california-shooting-idUSKBN0TL2F120151202#8tZr57Ti5xVm8K2g.99

The available information raises a few questions. First, the site of the shooting is baffling as a target. My son is developmentally disabled, and I can’t fathom a motive to target such a vulnerable population. Second, it seems likely this isn’t a domestic dispute or disgruntled employee given the number of suspects, casualties, and the military gear. It seems like a premeditated attack. Third, it won’t be at all surprising if the perpetrators are confirmed to be white. There seems to be  a great deal of denial-ism that domestic terrorism is a prevalent problem in our society despite the facts that there have been more homegrown shootings since 9/11 than ones related to Islamist terrorism. There are even correlations that shooters trend toward white, male, Christians.  America has a storied history of white supremacist terrorism against minorities, and that legacy continues as white supremacist views are adopted by newer generations. A new disturbing trend during the internet age is how often these types of attacks are openly planned on white supremacist and gun internet forums. Given the internet has become a common element  in radicalizing would be domestic terrorists; why aren’t these groups monitored more closely to preempt the violence? Why are people mocked for taking credible death threats online seriously?

However, the motive is still unclear, and it won’t be a surprise to me if there is an atheist mass shooter given participation in online hate forums isn’t  limited to Christians. Although, given that the majority of atheists are progressive, and Christians are a larger population with a history of offshoot white supremacist terrorist groups like the KKK; I would expect an atheist shooter to be a more rare individual. I fear we will see a rash of copycat shootings given the series of shootings that have happened so far.

Clearly our country has gotten better at preempting foreign terrorism since 9/11. Perhaps it is harder for natives to recognize domestic terrorism, and again there is a real element of denial-ism of the problem.  And of course there is a real lack of courage on the part of NRA types to stop interfering with better gun legislation. When I have brought up having better gun  legislation in the past, I  have gotten flooded by commenters fearful that they would lose their guns,  showing less concern over the victims of America’s endemic gun violence problem. I’ve never suggested taking America’s guns. One thing is certain Americans are not seeing an end to mass shootings anytime in the near future. The discussion is always polarized on either taking all guns, or unrestricted gun freedoms. There is no room for middle ground, sensible gun legislation. That we are resigned to this as a free people is repugnant.

*Update:This was a report posted with current information at the time. The title says “report” and names the source, the post itself differentiates what was preliminary and what was actually known.  Since this post new information has come to light, and now the FBI is investigating it as possibly linked to international Islamist terrorism.