Atheism never had good public relations, largely because of the smear campaign that labeled atheists as believing in nothing, or having an unreasonable rejection of even the possibility of a god, insisting instead that atheists have to know that no god exists. This was a very successful campaign because some of the greatest atheists of the last couple centuries refuse to identify by that label—because of these reasons. And religious proselytizers took advantage of that in their recruitment techniques. I could never identify as an atheist when I was young, because there’s lots of things I believe in. I just don’t believe anything on faith, and that’s apparently what religious people mean when they accuse someone of believing in nothing.

Nor would I would I have said back then that I know there is no god. Because how can we actually know anything about the supernatural? So I called myself an agnostic instead. Since then of course, I came to realize that the agnostic label answers the question of knowledge, but not the question of belief. While it is true that we can’t actually know anything about the supernatural—no matter how fervently some evangelists try to assert otherwise, that doesn’t have anything to do with whether you believe there is a god. You can be agnostic about that, and say that you’ve got this feeling that there is one, but admit uncertainty as to who or what that god is. Or you can admit that you don’t know whether gods exist or not, but that you’re simply not convinced that any do. One position is atheist, both are agnostic, and neither requires that you know anything about the supernatural.

I was atheist for 15 years before I learned what that word really meant: You don’t have to be certain there’s no god. But if you’re not convinced that an actual deity really exists, then you’re atheist. It’s that simple. You’re either convinced or you’re not and there’s no middle ground, no fence to sit on. So I learned to identify as an agnostic atheist. Just a few years ago, I stopped calling myself that—once I realized that I am justified in saying that I know there is no god—to the same degree and for the same reasons that I know there are no leprechauns. (1) Positive claims require positive evidence, and there is no evidence of them. (2) What is asserted without evidence can be dismissed without evidence. You don’t have to assume the burden to either prove every negative or disprove every absurdity imaginable. And (3) gods and leprechauns are both impossible according to the laws of nature. You don’t need to know that before you decide whether you have sufficient reasons to be convinced.

But as a young man, I didn’t know any of that nor much of anything else. I grew up mostly around Los Angeles in the late ‘60s and early ‘70s, and I was subjected to all manner of supernatural mumbo jumbo. There were virtually no open atheists. When believers criticized my lack of faith, they accused me of being a humanist instead. As a teenager in Texas in the 1980s, there was still no atheist option. If you didn’t buy into the one and only religion anyone knew about, then you had to be some sort of Satanist, a category which included neo-pagans and people who had no faith in anything. That’s why Heavy Metal was typically labeled Satanic devil music.

Such was the culture in America. But in Europe and Australia, it was different. Once Star Wars came out, then it seemed that there was another option, initially treated as a parody religion: so that on some of the national polls, instead of identifying as atheist, a lot of people wrote in that they were Jedi. In fact so many did that in 2001, Jedi became the 4th largest religion in England and Wales. Now for most of them, it must have been a joke, not much different than identifying as a Subgenius or a Pastafarian. But for me, it was different. I wasn’t always a skeptic. I was taught to believe whatever read in the newspapers—even the Weekly World News. If I’m watching a science documentary, then I would trust that too—on the assumption that some sort of quality control personnel had to be checking into and vetting this stuff before they let it air on TV. But it turns out we had problems with fake news long before the internet.

I had been raised to believe in the psionic powers of the mind, telekinesis, telepathy, astral projection, etc., all that Doctor Strange type stuff. Honestly there was a time when I believed in all the woo necessary to qualify as a Ghostbuster. Remember when Janine asked Winston Zedmore, “Do you believe in UFOs, astral projections, mental telepathy, ESP, clairvoyance, spirit photography, telekinetic movement, full-trance mediums, the Loch Ness monster, and the theory of Atlantis?” There was a time when I would have proudly said, yes to all the above. Star Trek reinforced the idea that these were things that some humans could actually do, and there were a lot of supposedly scientific shows about Russian adepts moving objects with their minds, or parapsychologists collecting ectoplasm at haunting sites. I was led to believe that such things were supported by science. So when I was twelve years old, I was primed to be duped by the pseudoscience documentary, In Search Of. Leonard Nimoy was the host, Spock himself. So of course whatever he said sounded logical.

One particular episode dealt with Kirlian photography. They would have an object like a leaf pressed between two photo-electric plates. The picture they got from that was recognizably a leaf, but not the way you’d see you’d see it in normal photographs. Instead it appeared as a pointillism pattern of tiny phosphorescent blue sparks.

I’d already been told that living things generate electricity. But what made this story interesting is that they also cut a leaf in half and took a picture of just the one half of it. At first we they only saw the half of the leaf they expected to see, but on an over-exposure, the whole leaf became visible. Not knowing that this TV show was secretly pseudoscience “for entertainment purposes only”, I, as a gullible pubescent boy, thought it was scientific evidence of life-force, the living energy generated by all living things.

Since I thought I was witnessing a legitimate scientific experiment, I was presented with a profound phenomenon that had to be explained. If the ghost of living things is still present even when the physical form is removed, then I took this life-force to be part of a larger environment, a sort of biosphere of living energy; that if you die, the supernatural essence that animates your material body would return to this global spiritual sphere. I likened it to water and clay. Clay can only be molded when it is wet. Similarly, life is mere material animated by an infusion with this other plane of existence. But when the clay dries or the body dies, than its spirituous wisp of life-force that makes it malleable would evaporate in evanescence to recombine in the clouds of the hydrosphere. This is how I imagined that Buddhists would achieve “one-ness” with everything.

This would also allow reincarnation: because if any organism ever had a spiritual component, (let’s call it a soul) then everything that ever lived should have one. When you die, it would be like pouring your cup back into the sea. But even if you dip your cup back in immediately, you’re not going to get all of your own original self back in there; even if you get some of you, you’ll get some of lots of other things too, like the souls of bacteria, grass, tropical fish, amoebas, and so on. That would be why most people couldn’t remember their past lives.

Two years later, in 1977, when I was 14, I heard Obiwan Kenobi say that “the force is an energy field created by all living things; it surrounds us and penetrates us, and binds the galaxy together.” This was the very first time anyone had ever said anything religious that made sense to me or that I could honestly believe. Elsewhere, (I think in one of the books) I read an extension of Obiwan’s statement; that “you can control it—to a point, but it also controls you, like making waves in an ocean with waves to move you”.

There was a precedent for this idea of living energy once in science, Ernst Stahl’s theory of vitalism was disproved by Friedrich Wöhler in 1828, but of course I didn’t know that then. I knew people who still believed in that sort of thing. Later on of course, I started finding out that Kirlian photography was a fraud and psionic powers were just made-up nonsense, as was practically everything else I believed until that time. Then I took college-level courses in biology, and understood why life didn’t need any sort of animating life-force; it does it all on its own chemically with no mysteriously missing elements necessary. 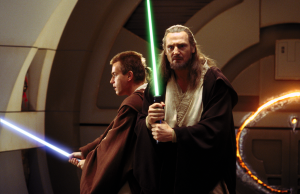 If I had read the Tao Te Ching back then, I’m sure I would have called myself a Taoist. My favorite quote from that is, “Nature acts without intent, so cannot be described as acting with benevolence, nor malevolence to any thing.” George Lucas based his idea of the Jedi and Sith on the combined ideas of Taoism and Confucianism, and of course the Samurai. But before I knew about all that, I can honestly say that once I abandoned Christianity in my teen years, my actual religion was Jedi. As embarrassing as that is for me now, I believed that sincerely then. For me, it wasn’t a joke. My only defense is that even as bizarre as this notion was, it’s still not as ridiculous as what mainstream religions believe.