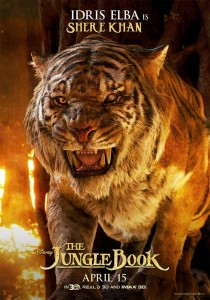 I just saw Disney’s live-action remake of the Jungle Book. I normally don’t have time to watch whole movies, and I really didn’t now either. But I did, just because Honest Trailers really liked it. I thought it was beautiful cinematography and animation, really well done. But I want to comment on the villain. I tend to like a lot of the villains I see in films. I dug Darth Vader’s fashion for example. Who didn’t like Tom Hiddleston’s version of Loki in the Avengers? Whether it’s Jack Nicholson, Mark Hamill, or Heath Ledger, you still like the Joker, right? You know you do. Remember Bricktop from Snatch? He was a creepy little dude with no kind of class, wit, or human emotion. Not one redeeming characteristic whatsoever. But somehow even he was a likeable character. 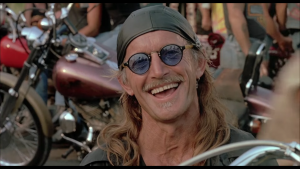 One of the cheesiest action movies I’ve ever seen was Stone Cold (full movie here) starring some football mullet from 1990 who joins a biker gang from 1980. The good guys were all empty dweebs, impossible to appreciate. But the bad guys! Ice Hensley and Chains Cooper (pictured left) seemed like people I knew and liked back in the day. I loved those guys. It’s hard to find a villain I actually hate: you know, the way you’re supposed to hate the villain. Although I’ll give Samuel L Jackson credit for his portrayal of Stephen from Django Unchained. Jackson has played a few villains, but that was the only time he ever played someone that I really hated. Leonardo DiCaprio also brilliantly portrayed a truly despicable character in that same film.

Disney can be up or down with this. Maleficent is an great example. She was a blandly one-dimensional antagonist in the old cartoon but a deeply passionate heroine in the recent reboot. However despite all the twisted psychos you find in movies, Disney cre 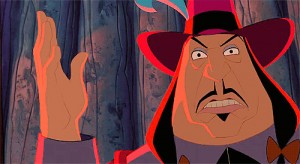 ated two different ones that I hated more than any villain in any movie, and I don’t think either of those characters ever committed a crime. One was Claude Frollo, the Archdeacon from the Hunchback of Notre Dame. The other was the wicked stepmother from Cinderella. I hated her more than any villain in any movie. I hated both of these characters because I knew people like them. Even as a child, I could smell something rotten in them. It’s kind of the same with Governor Ratcliffe from Pocahontas. When I look at him, I can’t quite figure out who he reminds me of exactly, but I’m sure it’s some pompous ass that I must have met in real life.

Getting back to the villain in the Jungle Book, I liked the original cartoon. I liked the original Shere Khan. That voice! James Earl Jones got nothin’ on the Oscar-winning George Sanders who started the tradition of oh-so-polite British accents for American movie villains. But that version of Shere Khan was such an eloquent and sophisticated character, it was hard not to admire him.

Not so for the new Shere Khan, voiced by Idris Elba. Honest Trailers got it right when they called him a “scary fucking tiger”. It wasn’t vengeance he was after, but the power to oppress and extort respect through unnecessary cruelty. He’s a manipulative monster who doesn’t even pretend to be polite, can’t be reasoned with, knows how dangerous he really is, and he knows that he has way too much control over certain aspects of your life. You know someone like that too, don’t you? I’ll betcha do.

Religious faith IS “belief without evidence”